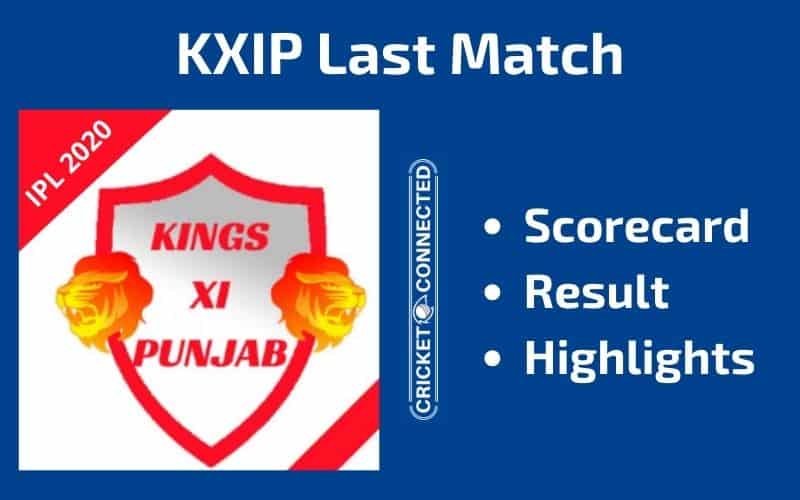 The last match of Kings XI Punjab was against Chennai Super Kings in the 55th league match of Indian Premier League 2019 and here you will know KXIP last match details, result, full scorecard, and match highlights.

Kings XI Punjab showcased a spectacular batting performance to defeat Chennai Super Kings by 6 wickets and 12 balls remaining. But it was too late as their victory only secured them the 6th spot in the points table of IPL 2019. After Chennai Super Kings had a put a big total of 170/5 in the first innings, CSK fans had almost ensured their victory over KXIP but the elegant batting performance of K L Rahul and Nicholas Pooran gave Kings XI Punjab their consolation victory. They were extremely glad to end the season defeating the league leaders CSK in their final match. Chennai Super Kings still had a good net run rate which retained their one in top two positions and a shot at the finals of IPL 2019.

Chennai Super Kings delivered a marvelous game with opening batsman Faf du Plessis scoring 96 runs off 55 balls which involved 10 boundaries and 4 sixes. He missed a well-deserved century by 4 runs as he fell for a brilliant yorker from Sam Curran in the 19th over. But he demolished the bowling attack of KXIP especially punishing Andrew Tye and Murugan Ashwin who conceded 37 and 33 runs respectively in 3 overs. Suresh Raina accompanied du Plessis in the batting spree scoring 53 runs off 38 balls which involved 5 fours and 2 sixes. Sam Curran and Mohammed Shami bowled well for KXIP in the death overs to restrict Chennai Super Kings to 170 for 5 wickets.

In the second innings, K L Rahul dominated from the beginning, and with Chris Gayle alongside, KXIP scored 108 runs in 10.3 overs in their partnership. Rahul scored his fifty in 19 balls and later continued to score 71 runs off 36 balls with 7 boundaries and 5 sixes. M S Dhoni decided to use Harbhajan Singh in the powerplay overs considering his previous performance but it backfired as he conceded 41 runs in his first two overs. Later he fought back in his last two overs taking three wickets for 16 runs which included K L Rahul, Chris Gayle, and Mayank Agarwal. But it was too late by then as Caribbean power striker Nicholas Pooran’s cameo batting of 36 runs in 22 balls with 2 boundaries and 3 sixes sealed the victory of Kings XI Punjab.