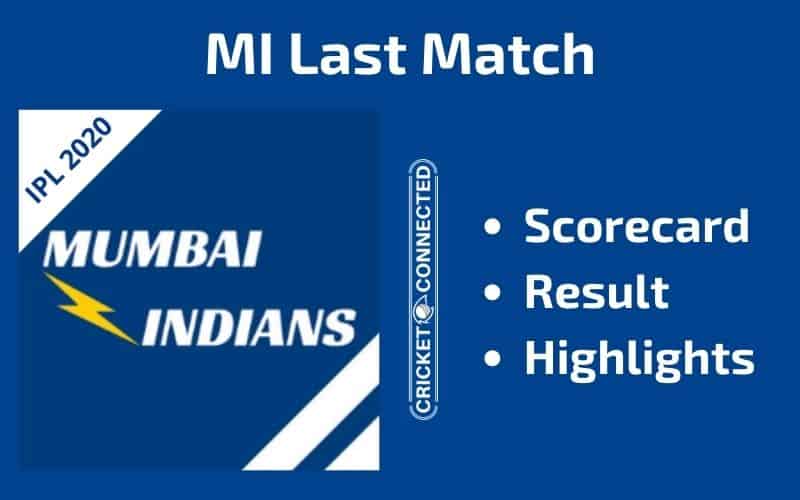 The last match of Mumbai Indians was against Chennai Super Kings in the Final of Indian Premier League 2019 and here you will know MI last match details, result, full scorecard, and match highlights.

Mumbai Indians who batted first secure a chaseable total score of 149/8 with the Caribbean power striker Kieron Pollard smashing a quick 41 runs off 25 balls. Mumbai Indians started off their innings very well collecting four sixes in the first three overs of the match. Quinton de Kock gave a splendid opening performance and CSK bowler Deepak Chahar had to struggle in the first and third over of the match. But he came with a fightback getting de Kock and Rohit Sharma’s wickets in two consecutive balls. Mumbai scored 45 for 2 wickets in the powerplay. Later Ishan Kishan and Hardik Pandya made CSK fans bite their nerves but they were long gone before the dangerous Pollard kept Mumbai Indians in the hunt.

Chennai Super Kings who batted second chasing a decent score of 150 runs scored by Mumbai Indians, put up a very good fight and were so close to victory till the 18th over of the match. Chennai Super Kings was in a better position at the end of the 6th over with 53 runs and only one man down. But Mumbai Indians fought back well in the middle overs quickly removing Suresh Raina and Ambati Rayudu. Rahul Chahar gave a very economical bowling performance for Mumbai Indians. The disastrous moment for CSK fans was when MS Dhoni got run out in the 13th over by Ishan Kishan’s direct hit.

Shane Watson who was leading the chase with a fierce 80 of 59 balls kept the hopes of CSK fans high. He changed the game drastically in the favor of CSK by hammering Krunal Pandya for three consecutive overs bringing down the target to 18 from 12 balls. Jasprit Bumrah’s 19th over was a turning point in the patch with the pacer bowling hard overs producing an astounding 13 dot balls overall in the match after having secured the wickets of Rayudu and DJ Bravo.

After Watson was run out in the final over of Lasith Malinga, CSK needed two runs off the final ball to win the title but Malinga dismissed Shardul Thakur with a masterpiece yorker to claim the spectacular win. Lasith Malinga showed his true class in the last over and secured the IPL 2019 title for Mumbai Indians.