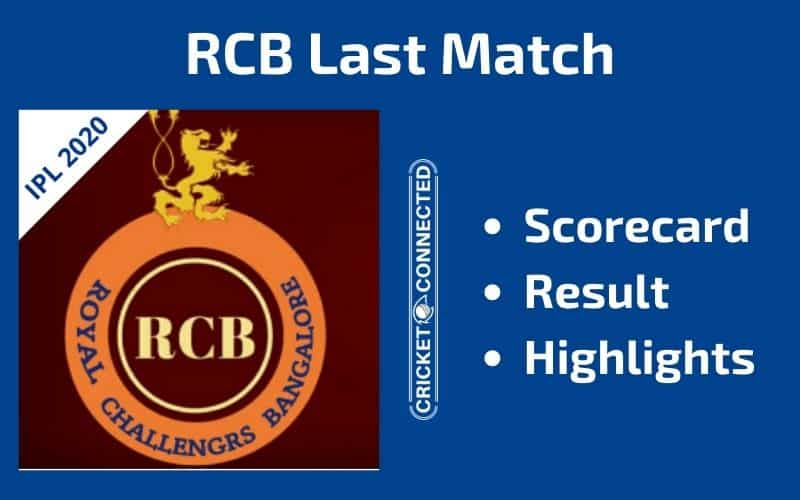 The last match of Royal Challengers Bangalore was against Sunrisers Hyderabad in the 54th of Indian Premier League 2019 and here you will know RCB last match details, result, full scorecard, and match highlights.

Royal Challengers Bangalore beat Sunrisers Hyderabad by 4 wickets in the memorable 54th match of IPL 2019. After collapsing with 20 runs for 3 wickets in three overs, Royal Challengers Bangalore recovered with an incredible turnaround in what seemed to be a hopeless match, to reach the target of 176 runs with four balls yet to spare. Shimron Hetmyer and Gurkeerat Singh Mann are the master players behind RCB’s nail-biting 4-wicket victory over SRH. Both batsmen secured exemplary fifties raining down with 4s and 6s. RCB ended the poor performed season with a positive victory while SRH’s hopes of securing a berth for the playoffs were kept on standby.

Sunrisers Hyderabad who batted in the first innings put a challenging score of 175 runs for 7 wickets, thanks to the brilliant batting of Kane Williamson who smashed 70 runs off 43 balls, hitting four 6s and five 4s. Williamson got his first fifty of IPL 2019 season and remained not out till the end blasting 28 runs alongside Bhuvneshwar Kumar in the final over of Umesh Yadav.

Earlier Sunrisers Hyderabad started off the innings well with the opening duo of Martin Guptill and Wriddhiman Saha scoring 46 runs in 4.3 overs before Saha fell for pacer Navdeep Saini. Manish Pandey and Yusuf Pathan failed to impress. Vijay Shankar scored a quick 27 which involved a few maximums and gave Williamson company. Even though wickets fell at regular intervals, Williamson kept the hunt by scoring 2s and 3s rotating the strike and occasional big hits.

Chasing a tough target of 176 runs, Royal Challengers Bangalore continued to disappoint their fans as Parthiv Patel, Virat Kohli and AB de Villiers, the top three of RCB snapped up early and RCB stumbled to 20/3 in three overs. Bhuvneshwar Kumar took the wickets of Patel and De Villiers.

The stunned crowd had lost their hope but Shimron Hetmyer and Gurkeerat Singh Mann had other plans. Both batsmen attacked the opposition like a Do-or-Die situation, with back to back big sixes and fours. Hetmyer scored half a dozen sixes and four boundaries to get 75 out of 47 balls and Gurkeerat made 65 in 48 deliveries with eight fours and one six in his bag. Together, they put up a 144-run partnership for the fourth wicket, which was the first hundred-plus partnership of RCB since 2013 where Kohli and De Villiers were not involved.