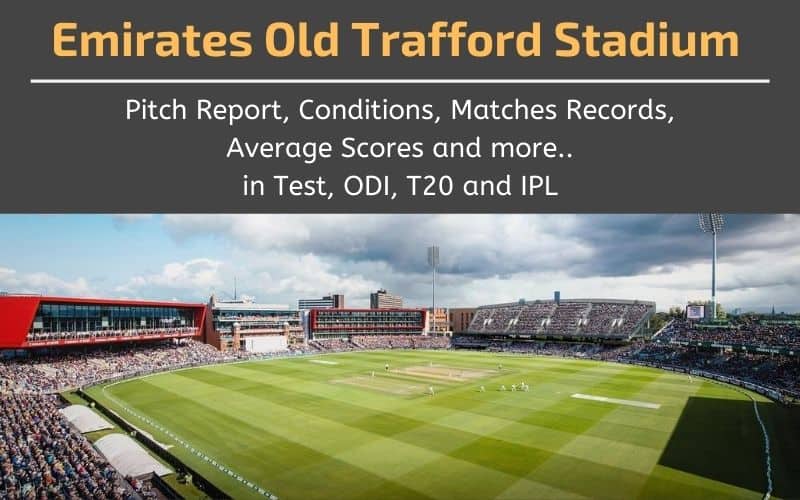 Emirates Old Trafford stadium is the 2nd oldest test venue after The Oval and was established in 1857. It hosted the first Ashes test match in July 1884 and also holds the record for hosting the greatest number of world cup matches (17). The stadium is home to the Lancashire country cricket club and has a seating facility for over 74140 spectators.

Since its inception in 2001, Emirates Old Trafford Stadium, situated in the city of Manchester, England has witnessed several interesting Test and ODI matches in which the conditions have been favourable to the hosting nation. 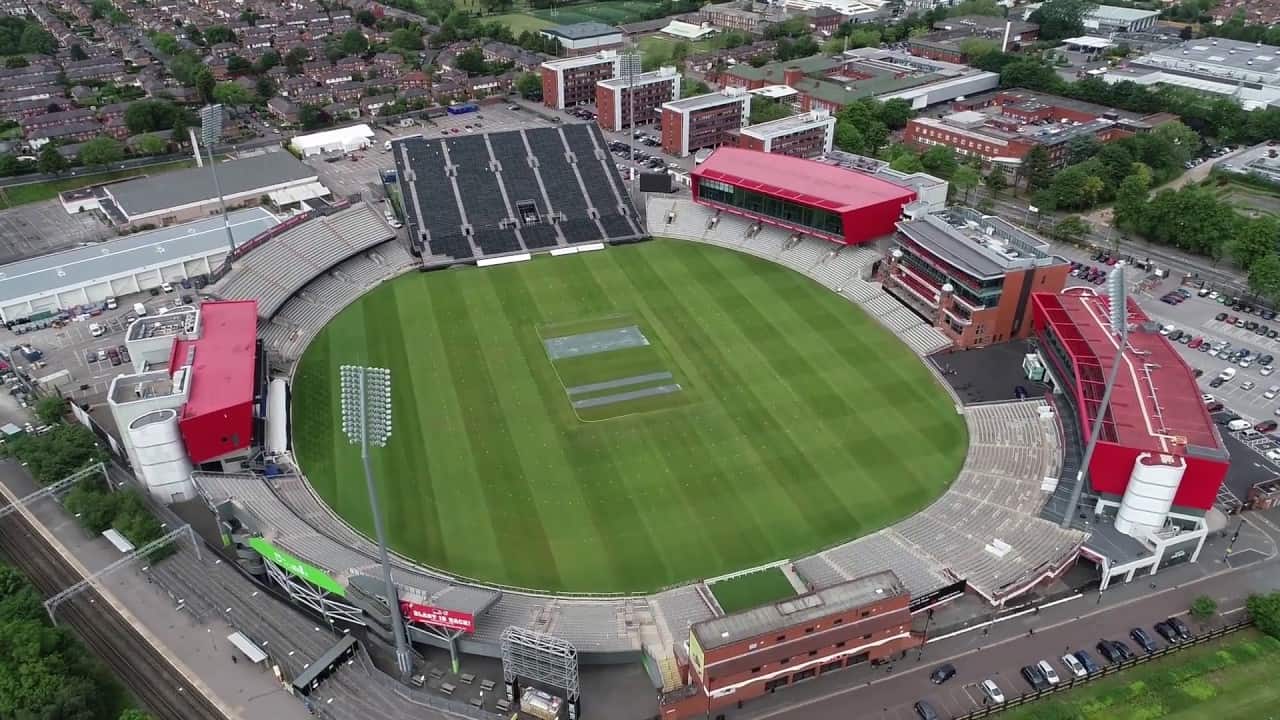 The stadium still holds some of the excellent unmatched records to date including Jim Laker’s bowling figures of 19 wickets for 90 runs and the first 10 wicket haul in a single innings. An interesting fact about the stadium is that The Master Blaster Sachin Tendulkar scored his 1st test hundred here at the age of 17 in 1990.

It is the fastest track in England and is historically good for batting but will take spin later in the game. Its pace has also made fast bowlers interested and the records here speak the same. But it lost its test status in 2009 and after some redevelopments, the stadium regained its test status in 2013.

Manchester city is known for its unpredictable weather and the stadium is the only ground in England where a test match has been canceled without a single ball being bowled and it happened twice – in 1890 and 1938.

The pitch is a paradise for batsmen in the first innings and so the team that wins the toss at Emirates Old Trafford Manchester Cricket ground usually decides to bat first to put up a winning score in the scorecard. The bowlers have to be patient and consistent and by the 3rd and 4th innings, the footmarks of the previous day bowlers make the situation better, and the batsmen start struggling to spin bowlers which is the reason for the steep fall in the average scores.

If no county games have been played at the ground for a few months, the surface might grow a little bit of grass which aids pacers as well. The pitch is known to be the quickest track in the country.

Here are the last 5 test matches average scores of all 4 Innings at Emirates Old Trafford Ground:

From the average scores in the all 4 innings of the last 5 Test matches at Emirates Old Trafford Cricket Ground Manchester, we can conclude that the first innings has a very high average score comparatively and with each subsequent innings, the average score deteriorates.

As it is a batting pitch, the teams winning the toss in ODI at Emirates Old Trafford grounds usually prefer batting first. Of the 55 total matches played here, 26 teams have won batting first and 28 teams have won batting second while 1 match had no results due to rain. In the second innings, the pitch gets slow as time passes and the ball does not come easily on the bat because of which it becomes difficult for batsmen to chase the score.

In the case of One Day International matches, the pitch condition is similar to the scenario of Test matches. In the last five matches played here, the average score is much higher in the first innings and the teams batting first have won all 5 matches.

In the last five matches played here, 4 matches were won by teams batting first. The ball comes well on the bat and unless the batsman times the shot wrong or is in poor form, it is easy to score high in the first innings.

Toss hasn’t played a major role to date in T20 matches here. As the ground has a batting pitch, we may expect the teams that win the toss in T20 matches to prefer batting first but it has proven fruitful only once. This is mostly due to the dew factor. As the T20 matches are day-night matches or completely night matches, the dew falling on the pitch makes it difficult for the bowlers to control the ball in the second innings and this becomes a major positive for power hitters.

Hence it is good for teams that win the toss to prefer bowling first. Moreover, as only 10 T20 matches have been held here and 3 were either canceled or left incomplete due to rain, it is hard to come to a conclusion.

The pitch is greenish-brown and flat which is ideal for batsmen and over time spin bowlers. As the wicket is flatter, the conditions are excellent for batting and average scores of 400+ are common in the first innings of Test matches and 300+ is common in the first innings of ODI matches. There is some extra zip off the deck for pacers as well and it is possible to get turn and bounce based on the weather. In Test and ODI matches, the flat pitch favors batting and the teams winning toss prefer to bat first.

Spin bowlers can help cut down the chase in the third and fourth innings in test matches because the flat pitch and the footmarks cause a good spin. Power hitters can make the game exciting in the case of T20 matches.

Here, we will be sharing the results and scorecards of the last 5 matches played in each format in Emirates Old Trafford Stadium. This in addition to the detailed pitch report and ground conditions explained before will help you develop an understanding of the pitch behavior in all four innings of Test matches and both innings in case of ODI and T20 matches.

This will aid in predicting the scores which can help you play and form your team in Dream11 and other similar Fantasy Cricket platforms.

A total of 55 One Day International matches have been played on this ground from 1972 to 2020. India has played 11 matches here, out of which we had 5 victories and 6 defeats. The last ODI match of India played in the ground was India vs New Zealand on 9 July 2019, in which New Zealand won by 18 runs.

A total of 10 International T20 matches have been played on this ground from 2008 to 2018. India has played two T20I matches here out of which we won 1 and lost 1 match. The last match played by India in the ground was between England and India on 3 July 2018, in which India won by 8 wickets.