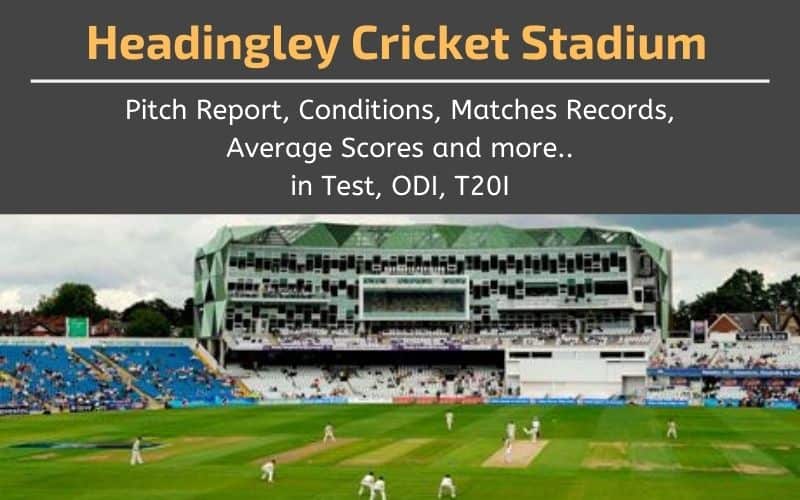 Headingley Cricket Ground is mainly a part of Headingley Stadium where other part is used for playing rugby. This ground was established in 1890 having seating capacity of 18350 expectators. This ground is situated in Leeds, England. Yorkshire county cricket club is the owner of the ground and Emerald Group holding the naming rights.

In Headingley stadium, Sir Don Bradman played a historical innings of 334 runs in 1930 Ashes test. In 1934 Ashes, he also gifted 304 runs innings in this venue. Geoff Boycott, former English test player, scored his 100th first-class hundred in this venue. This is that great venue where 1999 World Cup final was hosted and Harshall Gibbs dropped Steve Waugh in last moment. Steve Waugh then told Gibbs the he had dropped the title. Yorkshire cricket club scored highest ever domestic T20I total  260/4 in this ground. But no international T20I matches are played here.

headingley Cricket Ground is holding the status of one of the best test playing grounds in the world. Like other cricket grounds in England, it has historically been favorable for batting. But later in the match, spin bowling will take over. Its pace also enticed fast bowlers to deliver inswings, outswings and bouncers, as evidenced by the records.

While it is considered a good batting pitch, all eyes will be on the weather, whether the forecast predicts a cloudy day. As a result, swing could be on the counter top. The pitch is a batsman’s paradise in the first innings, so teams winning the toss usually choose to bat first for a winning score at Headingley. The bowlers must be patient and consistent to improve things by the third and fourth innings. During those innings, the batsmen begin to struggle against spinning bowlers, which causes the average score to drop like a stone rapidly.

Here are the last 5 test matches average scores of all 4 Innings at Trent Bridge Ground:

Here, from this stats, we can say that in 1st innings, batsmen take all the advantages from the pitch. And from 3rd innings, bowlers start getting the pitch advantages.

The first inningst score is noticeable, as it is hard to beat later. The dry pitch and the flat wicket contribute to the success of the spin bowler at their third and fourth innings.

In the last 5 Test matches held here, the team batting first has won 2 matches and 3 matches was won by the team batting second. Due to bad batting, average run in first innings has gotten low, creating chance for the 2nd batting team to chase easily.

In ODI, teams usually favor bowling on Headingley ground, because this is a batting pitch and chasing is easy. Of the 45 matches played here, 17 teams went first and 26 won second, while 2 matches had no result. Though in last five matches, team batting first won 3 times. The second innings gets slow with time and does not allow the ball to get to the bat, making it harder for batsmen to achieve the score.

Here are last 5 ODI matches average scores of both Innings at Headingley Ground:

So it seems that batting first in Headingley is better, but depending on weather conditions team captain and management should choose whether to bat or bowl first.

In the last five matches played here, 2 matches were won by teams batting first. It is easy to score high in the first innings but recent games are changing the idea.

Headingley Stadium does not host any international T20I matches. Though in a flat pitch like this, hard hitter batsmen can entertain the crowd playing various strokes. And also teams store huge runs in scoreboard. This situation is seen in England domestic T20I tournaments. Toss winning teams normally decide to bat first as the pitch favors batsmen first. But chasing runs is also much useful as new ball swings much.

As no international T20I matches played here, so there is no data about T20I in Headingley. We will update if any T20I match is hosted.

The pitch is flat and green much, which makes it ideal for seamers. The wicket is flat, so it is ideal to bat in the first innings of the test matches with an average score near to 380 and the ODIs score of 300 or near. Pacers can get some additional screen and they can also make the ball turn and bounce depending on the weather status. In test and ODI matches the flat pitch favor batting, and the teams that win the toss are more willing to bat first.

When international T20I matches start hosting in this ground, we can hope to enjoy high scoring crickets. As power hitters are very fierce in flat wickets.

Here, we will be sharing the results and scorecards of the last 5 matches played in each format in Headingley Stadium. This in addition to the detailed pitch report and ground conditions explained before will help you develop an understanding of the pitch behavior in all four innings of Test matches and both innings in case of ODI and T20I matches.

A total of 45 One Day International matches have been played on this ground from 1973 to 2019. India has played 11 matches here, out of which we had 4 victories and 7 defeats.