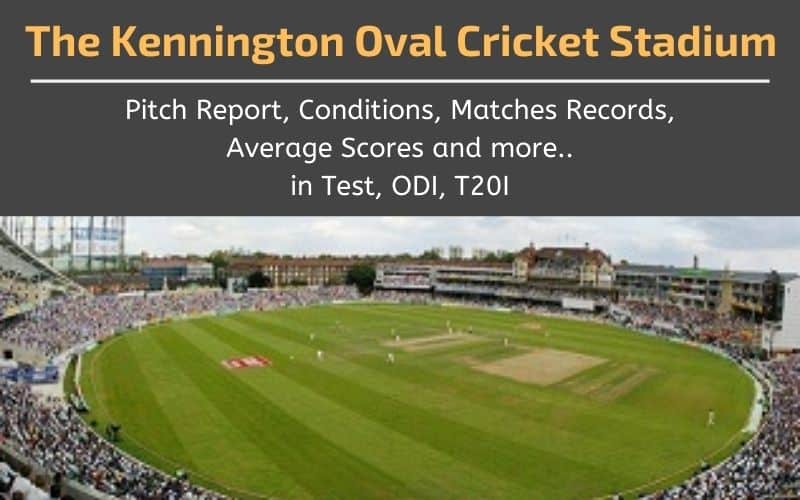 The Oval in Kennington, England is a venue full of sports history, including hosting English soil’s first test match, a game that WG Grace took a historic century in England’s 1880 victory against Australia. The Oval is known as the birthplace of the Ashes legend. The great Sir Donald Bradman played his last test innings.

English has a tradition to host the last test match of a series or the whole season in Oval. Kennington Oval cricket ground holds the record of most test match hosting. This stadium was established in 1845 and in 1880, England and Australia played first test match here. The stadium can accomodate 25500 visitors at once. Construction work is going on to increase capacity. Surrey County Cricket Club owns the stadium.

History says that this field gifts batsmen a lot. Batsmen can easily put a huge score in scoreboard. Along with England’s 903 and Australia’s 701, there are a lot of high team totals in Oval ground. We can say, the Oval never disappoint batsmen.

But this ground is not always batting friendly. Bowlers also dominated the ground and made batting team to score low. As England has a unpredictable weather condition, it cannot be said who may dominate in match, batting team or bowling team. Normally in test or ODI matches, teams want to bat first.

In the first innings, the pitch is ideal for batsmen, and thus the team who wins the toss in the Kennington Oval Cricket ground typically chooses to bat for a high score. The fast bowlers do not get much support. But the previous day’s decay improve the situation in  three and fourth innings. Spin bowlers start achieving sharp turns and batsmen begin to struggle.

If there are no county games on the ground for several months, the surface may sprout a bit of grass to support pacers. The pitch is reputed to be fastest track. But county games are always played in Kennington, so pitch surface is always lacks of grass.

If weather will be overcast then fast bowlers will get help and it will become difficult for batsmen.

Here are the last 5 test matches average scores of all 4 Innings at Kennington Oval Ground:

As batting becomes more difficult later in the game, the first innings score plays key role. While bowling on these decks, the dry pitch and flat wicket assist spin bowlers in achieving success in the third and fourth innings.

Because it is a batting pitch, teams who win the toss in an ODI at Oval normally prefer to bowl first. In the 73 total matches played here, 30 teams won batting first, 40 teams won batting second, and 3 match was called off due to weather. The pitch gets slowed in the second innings as time passes, makes it easy for bowlers putting end to chase.

If you have much hard hitter batsmen in your team, then you need not to think about the toss. The ground is batting friendly, so a massive score can be achieved as well as chase massive score. T20I matches are played at night or during the day-night. Dew on the pitch makes it harder for bowlers to control the ball in the second innings, which provides a big advantage for power hitters.

The surface is brown with greenish effect and flat, good for batsmen and spin bowlers. The pitch is flatter, a helpful condition for batting, and an average scoring of 400+ is normal in the test matches. There is some extra zip for pacers as well and it is possible to get turn and bounce based on the weather. The flat field encourages batting in test and ODI matches and the victorious teams like battling first.

In the third and fourth innings of test matches, spin bowlers can help reduce the chase because the flat pitch and footprints damage helps to make a sharp turn. In the case of T20I matches, power hitters may make the game exciting.

The stadium has two ends namely the Vauxhall End and Pavillion End. The distance from the center of the pitch to the boundary is about 67 meters onside and 70 meters offside, 68 meters on Vauxhall end side and 66 meters on Pavillion end side.

Here, we will be sharing the results and scorecards of the last 5 matches played in each format in Kennington Oval Stadium. This in addition to the detailed pitch report and ground conditions explained before will help you develop an understanding of the pitch behavior in all four innings of Test matches and both innings in case of ODI and T20I matches.

Test Match 5: England vs Australia on 20 August 2015
Result: Australia won by an innings and 46 runs.

A total of 73 One Day International matches have been played on this ground from 1973 to 2019. India has played 14 matches here, out of which we had 6 victories and 7 defeats. 1 match is abandoned.

A total of 16 International T20I matches have been played on this ground from 2007 to 2014. India has played zero T20I matches in Oval.

It’s a great batting wicket, so batsmen will find it easy to score runs here. Spinners will get into play from 3rd day of the test match. Winning records clearly say that in last 5 tests batting first team won 4 matches so team winning the toss would like to bat first and put some good score on the board.