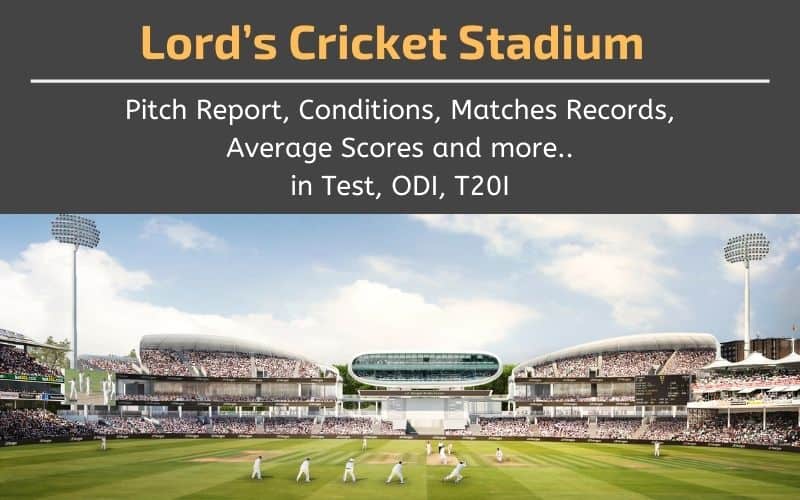 Lord’s Cricket Stadium is commonly known as Lord’s. It is situated in London, England. In 1814, this third ground of Thomas Lord was opened, soon becoming the principal venue, as cricket became the world leading sport in 19th century.  Marylebone Cricket Club owns the stadium and it is home of England Cricket Board.

This stadium is capable of holding 30000 visitors at single time. English government has developed proposals to increase the capacity of the stadium.

For fast bowlers as well as spin bowlers, bowling in this venue is much enjoyable and most bowlers get help from the pitch. In the first days of the test, it is a little easier to bat this pitch, but once the match moves onto the final days of the test match, the pitch will help fast bowlers more and more swinginging and bouncing from the pitch. The spin bowlers get turns well and also bounce, and the spin attack on the 4th and 5th days of the test match is very dangerous. In the first innings the pitch is a utopia for batsmen, so the team which wins the toss generally decides to bat first to achieve a winning score.

Here are the last 5 test matches average scores of all 4 Innings at the Lord’s Cricket Ground:

We can conclude that the average score in the 4 Innings in the last 5 test matches on Lord’s Cricket Ground is comparatively lower to the first but higher in second innings, and with each of the subsequent innings, the average score is getting less. It is obvious that the first two innings can be easily scored as the swing is smaller. The dry spot and the flat wicket are useful to the spin bowlers when they bowl on those decks.

In last 5 matches, 2 matches have very low totals in 4th innings. As because the target was low.

Although this is a batting pitch, ODI teams prefer bowling first because of the dew effect. The ground has dry pitch and it supports batmen and spin bowlers, and also slightly grassy, which thus supports seam bowlers. Therefore, it is important to decide whether to bat or bowl first in the pitch. Of the 67 total matches played here, 31 teams have won batting first and 32 teams have won batting second.

Here are last 5 ODI matches average scores of both Innings at the Lord’s Ground:

The pitch condition for one day International matches is similar to the test matches. The teams batting first and teams batting second have scored almost the same run during the last five ODI matches.

In the last five matches played here, all teams has won batting first.

The teams winning the toss at T20I matches usually prefer batting first because the ground has a punching/batting pitch. Mostly because of the dew factor. Since the T20I matches are played for the day or for all the night, the bowlers have difficulty controlling the ball in the second innings. In addition, it is hard to conclude based on only 10 T20I matches.

Here are last 5 T20I matches average scores of both Innings at the Lord’s Ground:

Watching the average of the last 5 T20I matches, the average score for the first Innings is obviously higher than the second Innings. Teams bowling first got success recent T20Is. 6 matches out of the 10 T20I matches played here won batting first.

The pitch is dry and have grass, which is perfect for both batsmen and bowlers. Batting conditions are excellent and average scores of 300+ in test matches are mostly common. The wicket is more flatter recently. The task is quite difficult for spin bowlers.

In test matches, the spin bowlers can be of great help to the team. In summer day, the dry flat spot favours spinners in Test and ODI matches, and the winning teams prefer to bat first. Spin bowlers can help the third and fourth innings to decrease the chase because the flat pitch and footprint cause a good spin.

The distance from the center of the pitch to the straight boundary is about 88.87 meters.

Here, we are sharing the results and scorecards of the last 5 matches played in each format in The Lord’s Stadium. This in addition to the detailed pitch report and ground conditions explained before will help you develop an understanding of the pitch behavior in all four Innings of Test matches and both Innings in case of ODI and T20I matches.

A total of 67 One Day International matches have been played on this ground from 1972 to 2019. India has played 8 matches here, out of which India had 4 victories and 3 defeats. One is tied