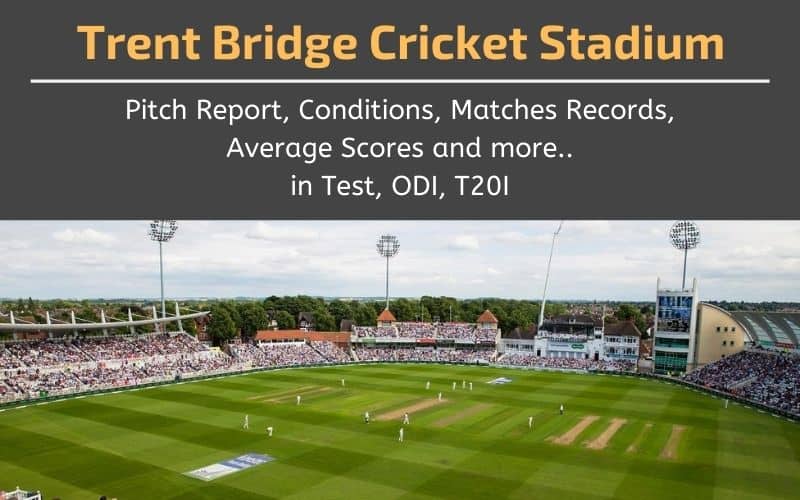 Trent Bridge Stadium, founded in 1899, is 10th most test cricket venue after The Oval, Lord’s and Old Trafford. The first Ashes Test Match was held in May 1921. The stadium is home of Nottinghamshire County Cricket Club and has a seating area for over 17500 people.

Located in the town of Nottinghamshire, England,Trent Bridge Stadium has gifted several interesting Test and ODI games in which the situation for the host nation considered as favourable.

Trent Bridge ground is one of best grounds of playing cricket. It is historically good for batting, but later spin bowling will start to reign. Its pace also interested fast bowlers to deliver inswings and outswings and the records speak the same thing here.

The pitch is a heaven for batsmen in the first innings so that they usually decide to bat first for a victory score at Trent Bridge. The bowlers must be patient and consistent as the footmarks of the previous day bowlers make things better by the 3rd and 4th innings.In those innings, the batsmen start suffering against spinning bowlers, which is why the average score drops steeply. If there have been no county matches on the ground for several months, the pitch surface might grow a little grass that helps pacers a lot.

Here are the last 5 test matches average scores of all 4 Innings at Trent Bridge Ground:

From the average scores from the four Innings in the last 5 Trent Bridge matches in Nottinghamshire, it is possible to conclude that the first innings have very high average and the average score decreases with each innings.

Because it is a batting pitch, the teams in ODI usually favor batting first on Trent  Bridge ground. Of the 49, 21 teams won first batting and 25 won second batting, while 3 matches had no results. In the 2nd innings, the pitch gets slow with time and the ball does not easily get on the bat, which makes it difficult to pursue the score for batsmen.

The pitch condition for One Day International matches is similar to the test matches scenario. In the last five games, the average scoring in the first games is much higher and all 5 matches were won by batting teams first.

In the last five matches played here, 4 matches were won by teams batting first It is easy to score high in the first innings.

Here in T20I matches, Toss has not played an important role normally. As the ground has a smooth pitch, we can expect the T20I teams will favor for batting first, mostly because of the dew factor. Since the T20I matches are matches of day and night, the bowlers find it difficult to control the ball at the second inning with their twisting on the pitch and this is a great positive factor in terms of power hitters.

That is why it is good to bowl first for teams winning the toss. Furthermore, only 11 T20I matches here. So, it is difficult to conclude.

The pitch is flat and greenish-brown, making it ideal for batsmen and spin bowlers. Because the wicket is flat, the conditions are ideal for batting, with average scores of 400+ in the first innings of Test matches and 300+ in the first innings of ODIs. Pacers can get some extra zip off the deck, and depending on the weather, they can also get turn and bounce. The flat pitch in Test and ODI matches favors batting, and teams that win the toss prefer to bat first.

Because of the flat pitch and footmarks, spin bowlers can help cut down the chase in the third and fourth innings of test matches. Power hitters can make the game exciting in the case of T20I matches.

The stadium has two ends namely the Pavillion End and Radcliff Road End. The distance from the center of the pitch to the boundary is about 72 meters onside and 60 meters offside, 66 meters on pavillion end side and 70 meters on Radcliff end side.

Here, we will be sharing the results and scorecards of the last 5 matches played in each format in Trent Bridge Stadium. This in addition to the detailed pitch report and ground conditions explained before will help you develop an understanding of the pitch behavior in all four innings of Test matches and both innings in case of ODI and T20I matches.

Test Match 3: England vs Australia on 6 August 2015
Result: England won by an innings and 78 runs.

A total of 49 One Day International matches have been played on this ground from 1974 to 2019. India has played 6 matches here, out of which we had 3 victories and 3 defeats.