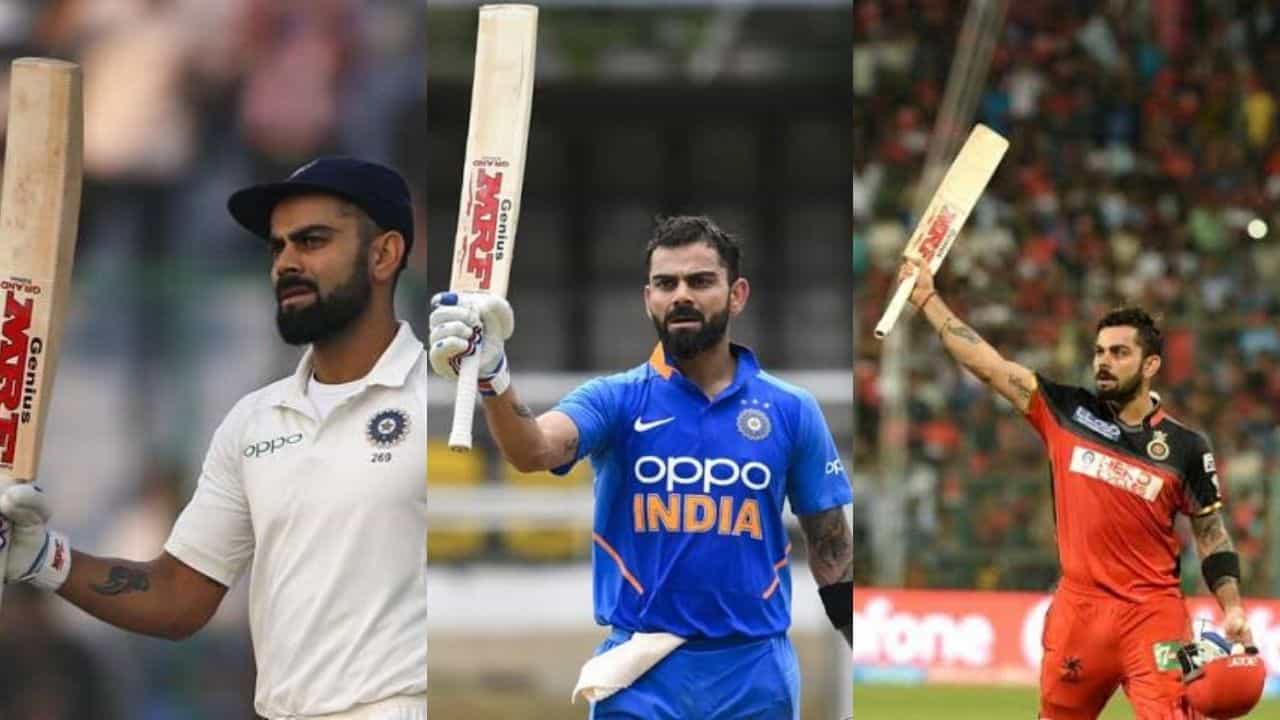 Over the years, Virat Kohli has established himself as one of the modern greats by his stupendous batting effort. To be precise, he is showing sheer dominance over all formats of the game. So far he has scored 74 centuries across all forms of the game. However, today, we are here to rejoice some of his incredible centuries from his career.

Virat Kohli stats in all formats proves that what milestones he has achieved until now and today in this article we will discuss about Virat’s top 10 centuries and best innings in International cricket and IPL that we can never forget.

Also Read: Who is the best Virat Kohli or Steve Smith

Top Centuries and Innings of Virat Kohli in IPL T20 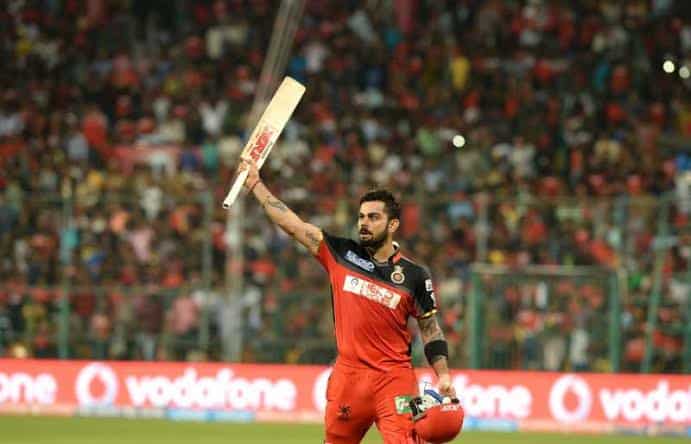 top centuries and innings of virat kohli in ipl t20

After putting into bat by Gujarat Lions, RCB lost the wicket of universe boss Chris Gayle very cheaply. Meanwhile, Virat Kohli already scored two brilliant centuries. So he was on the verge of making a third one.

Two batting genius Virat Kohli and AB De Villiers came into bat with some real intent. They killed the Gujarat Lions bowling attack with their tremendous batting effort. Both of them scored a hundred. More importantly, both of them added 227 runs for the third wicket partnership.

Virat Kohli scored 109 runs off 66 balls, with eight six and five fours. It was one of the most excellent innings of his career. Besides, the innings itself a big statement of his ability as a T20I batsman.

Kings XI Punjab chose to bat first on a belter of a pitch of Bengaluru. However, Virat Kohli was really up to the mark to grab the opportunity. He already scored to three scintillating hundreds in the tournament and searching the fourth one.

Virat Kohli alongside Chris Gayle continues his dominancy with masterful batting. They were bashing the KXIP bowlers all over the ground. Chris Gayle got out after scoring a tornado innings of 73 runs off  32 balls. Nonetheless, Virat Kohli looked to continue to extend his grip in the match with a brilliant hundred.

He played remarkably well to score 113 runs off just 50 balls, with eight sixes and twelve fours — based on his soulful innings RCB posted an unassailable score of 211 off 20 overs.

In the chase, Kings XI Punjab bundled out by 120. Yuvendra Chahal was the chief destroyer with the bowl in hand, who took four wickets in his four overs quota.

Eventually, Virat Kohli awarded as the man of the match for his masterclass innings.

After a rare failure in the previous match against the Mumbai Indian, Virat Kohli was desperate to give his team a blistering start.

The task was not easy as his opening partner Parthiv Patel got out early. But he looked intensely focus and took control of his hand to hand RCB a robust platform at the top. Moreover, he scored a timely 100 off 58 balls with four sixes and nine fours. His effective innings helped to set an above par score of 213.

In the chase, KKR looked all over the place up until Nitish Rana came to bat. He and Andre Russel almost sealed the game. But eventually, it was too much for them. RCB held their nerve to defend the total.

The scenario was much more difficult for Virat Kohli in this particular game, in the absence of Chris Gayle and AB De Villers. But he took the leadership comparatively new batting line up, to guide his team towards a safe score.

Top Centuries and Innings of Virat Kohli in ODI

top centuries and innings of virat kohli in odi

After winning the toss of the fifth match of Asia Cup 2012, Pakistan posted an intimidating 329 runs based on the hundreds from both openers in 50 overs. However, Virat Kohli was the big hope for the team India. Before this game, he had already mastered the art of chasing big totals in the ODI format.

In the chase, India looked in trouble with Gambhir’s early exit. Virat Kohli and Sachin Tendulkar played very well to take charge of the run chase. Both of them added 133 runs in their partnership. In the meantime, Tendulkar dismissed after reaching the fifty. So Virat Kohli had to make his into a big hundred to reach the target.

He played an outstanding inning off 183 runs to guide India through the mammoth chase. Moreover, he was awarded as a man of the match for his remarkable batting display.

This Inning was crucial for Virat Kohli, as the number four batting position was on the line ahead of the World Cup 2011. He delivered very well with an excellent hundred to seal the spot.

Australia posted a below-par score of 292 based on the cautious hundred from the captain Micheal Clark. However, In the chase, India lost both of their openers inside 35 runs. Now it was Virat Kohli who can move his team forward in the hunt.

He scored a blistering 118 runs to set the base for India. Moreover, India chased down the score very comfortably inside 49 overs.

Virat Kohli awarded as the player of the match for his tremendous effort.

Virat Kohli was the lone warrior of his team in a particular match. Although they lost the game, he was able to display a lot of character during the chase through his magnificent hundred.

At first, New Zealand posted a challenging total of 292 runs in 50 overs. In the chase, Indian was in distress after losing the wicket Rohit Sharma. However, the 58 runs partnership between Shekhar Dhawan and Virat Kohli helped India to rebuild.

Virat Kohli looked to take the attack to the bowler. Moreover, he was doing very well until getting out by a full-toss. But as the wicket was falling in quick succession, the task was not straightforward against the New Zealand pace attack. As a result, India fell short by 24 runs in the end.

Nonetheless, the Indian fan still remembers this match for the wonderful batting effort of Virat Kohli.

Top Centuries and Innings of Virat Kohli in Test 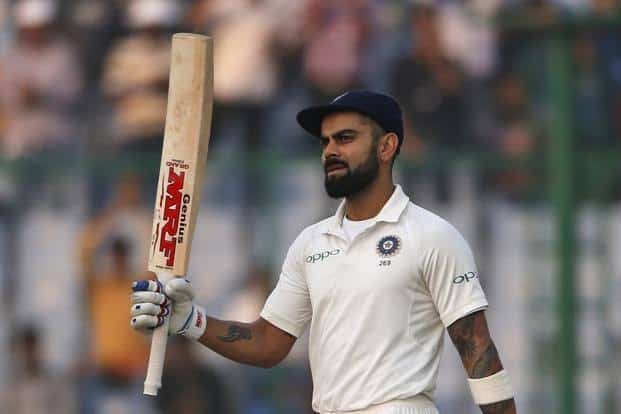 top centuries and innings of virat kohli in test

England was in a comfortable position after putting a decent first innings score of 400. However, Virat Kohli looked in good shape in the previous matches of the series. So the spectator was expecting something big from him. India started their innings well with Murali Vijay hundred.  He alongside Pujara added 1407 runs for the third wicket partnership. Which eventually set the platform for Virat Kohli to cash in.

Virat Kohli fluently started the innings and was eyeing big innings. He, in association with Murali Vijay, looked to take the game away from the opposition. However, as Rashid bagged the price wicket of Murali Vijay India witnessed a further collapse. But Virat Kohli was rock solid at the other end in seek of support.

After the dramatic stumble, Jayant Jadhav came to the party as a surprise package to involve a humongous of 247 runs with Virat. In the meantime, Virat Kohli reached the magical figure of 200. Eventually, his majestic innings ended by 235 runs to Wokes.

Australia was already dominating the series by 2-0 against India in the series. So India needed something monumental to show some character during the tough tour.

After winning the toss, Australia posted an emphatic first innings score of 530. As a result, India was required to display some good show with bat to stay in the game. In reply, India started the innings well with Murali Vijay fifty. However, after two quick wickets, India was slightly in the back foot.

Virat Kohli came to the bat at the number four position as usual. Now it was up to him steady the ship. Thankfully he started the innings very well with his trademark cover drive.  After his arrival, Vijoy perished very shortly. Here comes the Ajinkya Rahane, who has an outstanding reputation for scoring big runs in the away conditions.

Moreover, once again, he has delivered with the bat to reprieve team India. He, along with Virat Kohli, involved in 262 runs partnership to steer India to the safe region. Both of them played exceedingly well to make a mockery of heavyweight Aussie pace attack. Meanwhile, Virat Kohli scored 169 runs off 272 balls. On the other hand, Rahane scored 147 runs.

This innings of Virat Kohli do consider one of the finest of his career where he showed an outstanding exhibition of batting against a top-quality pace attack.

India was able to draw the match based on the masterclass innings of Virat Kohli.

After winning the toss, South Africa was in a comfortable position by putting a decent total in the first innings. India had to reply with a meaningful score to stay in the hunt. India was in trouble after losing the wickets of Kl Rahul and Chestawasr Pujara. Virat Kohli came to the crease to cover the initial disaster.

He, alongside Murali Vijay, added 79 runs in the partnership. A big hundred needed from India’s perspective. As usual, Virat Kohli was standing tall, and the wicket was stumbling at the other end. During the innings, he played some insane shot.

He played a brilliant inning of 153 runs off 217 balls, although India lost the test due to the batting failure in the second innings.

Virat Kohli had a nightmare England tour in the last time around. As expected, he made a lot of adjustments during the 2018 series. As a result, he was running a rich vein of form.

After making rather impressive first innings score based on Virat 97 runs. Indian bowler was all over the place to the England batting unit.

However, a decent second inning score required for making further grip on the match. Likewise, the first inning, Virat Kohli, was up to the mark to deliver for the team. He scored a mesmerizing 103 runs to set the base for the memorable win. India posted a mammoth target of 521 runs for England. Although England showed some fight with Josh Buttler hundred. But in the end, it was too many for them. India won the match by 213 runs.

You may also like to read: Virat Kohli vs Rohit Sharma Stats: Who is Better Batsman? (Comparison)