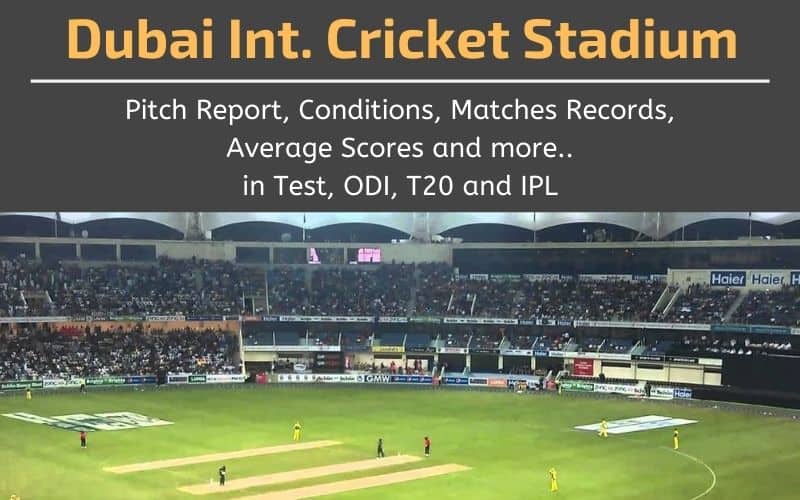 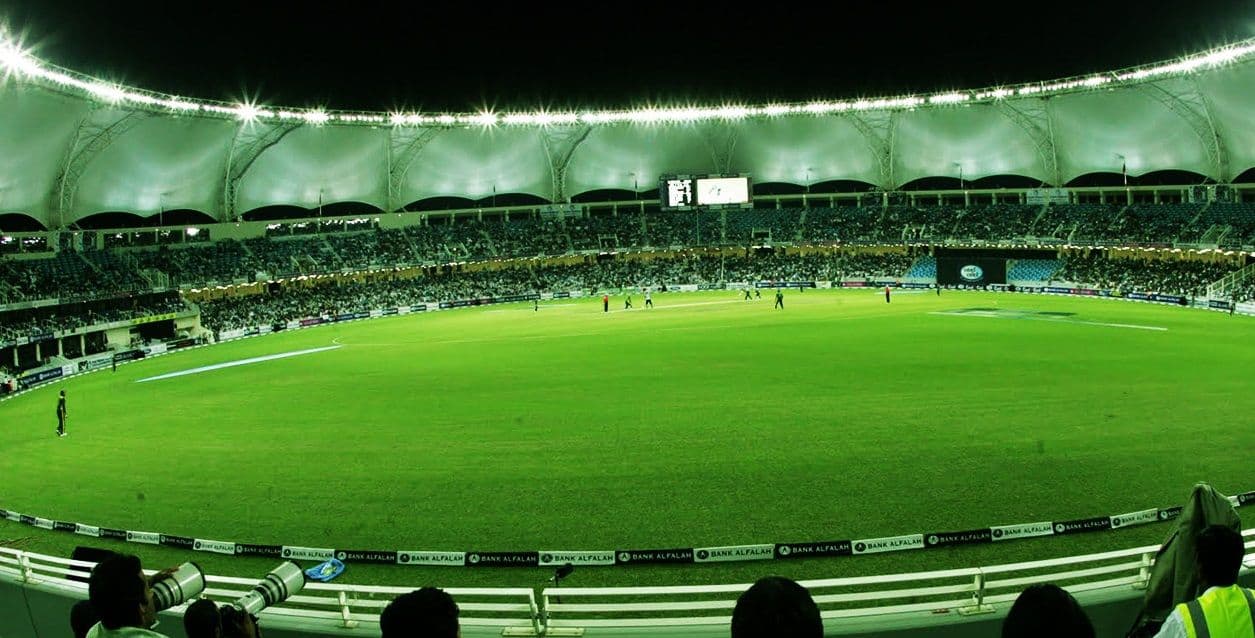 The pitch is one of the most unusual pitches in which matches are held as it is a bit rough with wide cracks at some parts aiding spin bowlers and small patches of green grass in other parts that aids pace bowlers. Overall, the brownish tinge pitch has large bare surfaces that makes batting very easy. Since it has a small boundary and very little grass on the pitch, it is very good for batsmen. The green patches might aid slow seamers in the initial days but as the days pass, the wicket gets flatter. With patience and performance, spin bowlers can be a great asset to the team in Test matches.

As the pitch is devoid of grass, the fast bowlers struggle a lot in the early days and hence the team that wins the toss at Dubai International Cricket ground usually decides to bat first to put up a winning score in the scorecard. It is a good wicket for test matches and the average 1st innings score is 450+ in Test matches. The bowlers have to be consistent and by the 2nd and 3rd innings, the footmarks of the previous day bowlers make the pitch abrasive, and the batsmen start struggling to spin bowlers which is the reason for the steep fall in the average scores. In the last innings of the test match, the bowlers will get help from the pitch, pacers will get swing due to cracks developed or dry wind flows. Spin bowlers will be great on the dry and rough pitch.

Here are the last 5 test matches average scores of all 4 Innings at Dubai Cricket Ground:

From the average scores in the all 4 innings of the last 5 Test matches at Dubai International Cricket ground, we can conclude that the first innings has a very high average comparatively and with each subsequent innings, the average score deteriorates. Again, in the 4th innings, batting gets easier as the wicket gets flatter.

It is evident that it is easy for batsmen to score runs on the first two days as there is lesser swing. In the fourth innings, the wicket gets much flatter, making batting easier again, but still, spin bowlers can take wickets with a good turn.

In ODI, Dubai ground pitch is batting friendly and you can get a good score in first innings, the bowl will come good on bat and batsmen will enjoy batting here in the power play of the ODI match. Spinners can also come into the play as it will dry and flat pitch and spinners will get good turn and bounce which can trouble any batsman. The team who wins the toss will decide to bat first as in the initial Innings, the flat pitch will help the openers to form or to give nice inertia to scoreboards with fine partnerships. The boundaries are not so big as which are in Australia. So, the total score of 300+ might can be achieved.

In the case of ODI, at the Dubai International cricket stadium, the hot climate favors the most to batsmen, this helps the team who is building the scoreboard rather than a team who chase the score in second Innings.

Sometimes dew factor affects the bowler, as their deliveries don’t get the required grip for spins. Wicket mainly remains flat at late-inning, so spinners can grasp the wicket at death overs. As per records, spinners had to get wickets the most at UAE grounds. Experience majorly works for batsmen’s on such type of pitch.

In the last five ODI matches played here, the team batting first has managed to score more runs mostly but by a small margin.

In the last five matches played here, 2 teams have won by batting first, 2 teams by batting second and 1 match was tied. The ball comes well on the bat and unless the batsman times the shot wrong or is in poor form, it is easy to score in the first innings.

In T20 Dubai Pitch is good for batting and batsmen will enjoy batting here in T20 matches. A total of 15 T20I matches were held in the month of October and November 2019, out of which 12 matches were won by teams batting first. If it is a day match, the first innings is easy for batsmen to score whereas, in the second innings, the pitch gets slow as time passes and the ball does not come easily on the bat because of which it becomes difficult for batsmen to chase the score. Interestingly not every captain who has won the toss has chosen to bat first here. This is because in day-night and night matches, depending on the weather conditions, dew makes it hard for bowlers in the second innings, and the power hitters can take this situation and turn it into an advantage.

In the last 5 T20I matches held here, all 5 teams that won the toss decided to bat first and 4 matches were won by teams batting first.

The pitch will favor batsmen in case of IPL matches with occasional gain for spin bowlers. Toss hasn’t played a major factor in predicting the winning team in IPL matches so far. But it has been noticed that teams winning the toss prefer bowling first considering the effect of dew on the pitch. The 2014 season of IPL, abbreviated as IPL 7 was half held in UAE. According to pitch reports and conditions, aid that it could all come down to who plays spin better as the pitches are going to get tired with so much cricket being played on them in extremely hot conditions.

Pitch will mainly help to spin bowlers and in the second innings, it will be easier to bat on this pitch. While discussing toss in this tournament the team who wins the toss doesn’t might be that much avail the benefits as the records denote that there are 50-50 chances of winning or losing the game, because last overs, low scores, might make it easier to chase the score after losing the toss, even then only if the team who wins the toss choose to build a scoreboard.

Now this season of IPL 2021 is already delayed, but after several meets of BCCI, the IPL 2021 is scheduled in UAE will be hosted by UAE. So onwards the Dubai stadium is approached as a fine option for t20 formats.

Recently the Dubai stadium pitches maintained by Toby Lumbsden, the Head Curator of the Dubai International Stadium, works hard to ensure a pitch is suitable to produce competitive cricket and the focus will be majorly on IPL, because as last season held in 2014 had only a half, but this year 2020 the UAE is hosting the whole IPL tournament. To maintain the pitch as well as the outfield under the hot and humid conditions of Dubai isn’t an easy task it will be.

The average scores in both innings in the last five IPL matches do not differ by a huge margin. In the recent times, the pitch conditions have changed a lot. We can look forward to the results of IPL 2021 season for a better understanding of the pitch as quite a good number of matches will be played at Dubai International Cricket Stadium this year.

The nation is favored with sunny days around the whole year mainly, rainy days are quite absent. The hot and dry weather build cracks on pitches which ultimately gives the bounce and a dusty, very dry pitch will favor the spin bowling the reason is that the ball will grip more on dusty pitch-giving the team with the superior spin bowlers a significant advantage during the particular slot of duration initial or death overs.

In Test and ODI matches, the hot day and the dry flat pitch favors batting and the teams winning toss prefer to bat first. Spin bowlers can help cut down the chase in the second, third and fourth innings because the flat pitch and the footmarks cause a good spin. But in T20 and domestic limited-overs matches, dew has a great effect on teams batting second, and hence the teams winning the toss might prefer bowling first.

One side of the boundary is long and the bowlers and fielders will face a tough time on guarding the ball from scoring 2’s and 3’s.

The Dubai International Cricket Stadium is situated near the Persian Gulf. So the warm and moist air winds flow from gulf to land is obvious. The wind is warm all day making the pitch dusty and hard. This helps the bowler. But these conditions get reverse in the night as the warm air starts to cool down which let the moisture to settle on ground and pitch due to dew phenomenon, this mainly favors batsmen’s, as the ball doesn’t swing well and doesn’t get a required bounce. And settled batsmen can rotate the scoreboard for a long duration.

Here, we will be sharing the results and scorecards of the last 5 matches played in each format in Dubai International Cricket Stadium. This in addition to the detailed pitch report and ground conditions explained before will help you develop an understanding of the pitch behavior in all four innings of Test matches and both innings in case of ODI and T20 matches. This will aid in predicting the scores which can help you play and form your team in Dream11 and other similar Fantasy Cricket platforms.

Test Match 1: New Zealand vs Pakistan on 24 November 2018
Result: Pakistan won by an innings and 16 runs.

A total of 35 One Day International matches have been played on this ground from 2009 to 2019. India has played 6 matches here, out of which we had 5 victories and 1 tie. The last ODI match of India played in the ground was between Bangladesh and India on 28 September 2019, in which India won by 3 wickets.

A total of 62 International T20 matches have been played on this ground from 2009 to 2019. India has not played a single T20I match here. The last match played in the ground was between Netherlands and PNG on 2 November 2019, in which Netherlands won by 7 wickets.