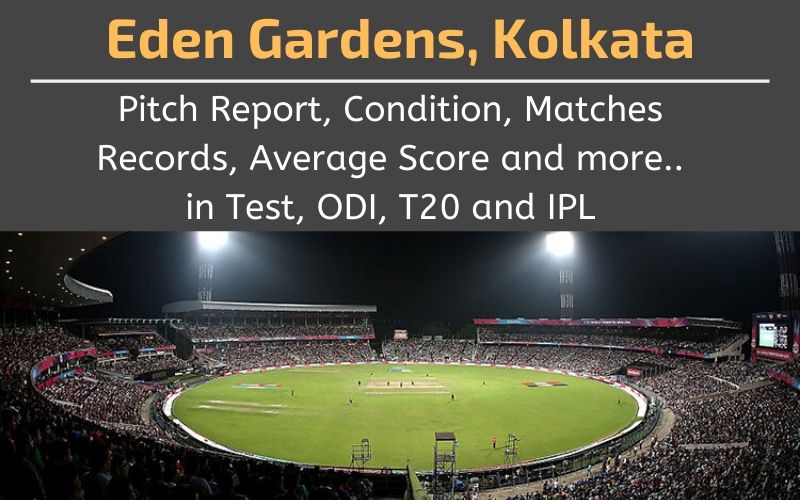 In this post we will talk about the Eden Gardens pitch report according to all Cricket formats Test, ODI, T20 and you will also get IPL pitch report for Eden Gardens, Kolkata Cricket ground.

From BCCI, Kolkata’s Eden Gardens Cricket ground has received the award for the India’s best Cricket ground two times. It is the largest cricket stadium in country India and the second largest in the world.

On Eden Gardens pitch, batsmen have to be careful in the beginning. Because on this pitch you will often see green grass which is helpful for fast bowlers. In Test matches, there is a tremendous swing in the first innings because groundsman leave grass on the wicket but as time passes, it becomes easier to bat on in the second and third day. On the fourth and the fifth day, due to the foot marks of the bowler, the ball starts to turn very much, so with the fast bowlers spin bowlers also get help with the pitch and that time the hardest time to bat on the Eden Gardens pitch.

As we have made average of the scores of all 4 Test innings of the last 5 Test matches at Eden Gardens Cricket ground, we can say that there have been very few runs in the first innings and too many runs in the second innings and very few runs have been scored in the third and fourth innings. . It can be clearly inferred that it is very difficult to bat on the first day of the Test match, it is easy to bat here on the second and third day and from the fourth day this pitch becomes difficult to bat.

The team that wins the toss in Test matches always decides to bowl first on Eden Gardens Test pitch because in Tests we often see green grass on the pitch, which gives the fast bowlers best swing in the early hours. The top order batsmen need to manage the swing. It is not easy to bat here on the first day, but even after the top order collapsed in the first innings the middle order can manage to score runs like 230+ in Tests. Batting here in the second innings becomes very easy, due to which you can score up to 360+ runs in the second innings. The pitch in the second innings does not help the bowler as much as the first innings. If the team takes the lead in the second innings, then the spinners in the third and fourth innings are helped by the foot marks of the fast bowlers. Very few scores are scored in the third innings and fourth innings.

Toss Factor in ODI: Here in the last five matches, the team batting first has won all the matches because in the first innings the ball comes well on the bat and it is easy to score. So winning the toss in ODI at Eden Gardens, teams always go with batting first.

ODI Matches Winning Record at Eden Gardens: Here in the last five matches, the team batting first has won all the matches because it is easy to score runs in the first innings. And in the second innings, the pitch gets slow as time passes. The ball does not come easily on the bat because of which batsmen do not play Proper Shot and it becomes difficult to chase the score.

As you can see the average scores of these last 5 T20 matches, more runs has scored in the second T20 innings than the first innings and team batting in second innings also chased well the scores. Therefore, the team who bowl first here can restrict the other team to short runs on this pitch in T20 can easily achieve the target. Eden Gardens is very popular for its T20 wicket, here you get to see very exciting matches.

Toss Factor in T20: Toss has great importance in T20 match according to the Eden Gardens T20 Pitch and conditions. The team that wins the toss decides to bowl first because T20 matches in India start at 7 pm. In the second innings, more dew starts falling here due to which the spin bowler is unable to keep full control to the ball and they are unable to defend the score despite having a slow pitch.

This is just opposite to the T20 International pitch, there was toss has importance to choose bowling first but here in Eden Gardens IPL pitch the toss play no important role because according to the last five IPL matches winning records we saw that team chasing the score wins 3 matches and 2 matches won by the first batting team and so there is no such difference and any reason to choose bowl first or bat first, the only thing teams will look is dew so chasing the score would be preferred in most chances team winning the toss and team having good spin bowlers would like to bowl first on the Pitch instead of bowling in second innings with dew conditions.

In IPL at Kolkata Eden Gardens ground team chasing the score won more matches than the team batting first. Team who bowled first won total 3 matches out of last 5 IPL matches at this ground and team batting first won 2 match and that was also too close margin match.

In limited-overs cricket and in winter season, dew shows its effect, so the team that wins the toss prefers to bowl first. The Eden Gardens pitch gives a little spin in the first innings. But due to dew conditions in the second innings, the bowlers do not get this benefit. This ground is very close to the Bay of Bengal, due to which clouds are seen in the sky and it becomes difficult to start the match once the rain starts.

According to Wikipedia distances from the center of the pitch to the boundary is about off side 66 Meters and onside 69 Meters, High Court end side 64 meters and Pavillian 71 Meters around the ground.

Now we will know all Cricket formats matches records at Eden Gardens, we will share here last 5 matches records, scorecards of all formats, so that you can know how this pitch behaves in all 4 test innings, both ODI innings, both T20 innings, also you will be able to inferred scores in all innings which can help you play and make your team in dream 11 or any other Fantasy Cricket platforms.

Total 42 Tests have been played at this ground from 1934 to 2019, out of which India has won 13 matches, lost 9 matches and drawn 20 matches. Last Test match of India at this ground was played with Bangladesh on 22 November 2019, India won that match by an innings and 46 runs.

Test Match 1: India vs Bangladesh on 22 November 2019
Result: India Won by an innings and 46 runs

Test Match 4: India vs West Indies on 6 November 2013
Result: India won by an innings and 51 runs

Total 31 ODIs One day international matches have been played on this ground from 1987 to 2017. India has played total of 22 matches here, out of which 12 have won and faced 8 defeats. 2 Matches is abandoned due to Rain.

In 2020, India was about to play ODI against South Africa, but the match was cancelled due to pandemic situation. Since then, no ODIs are played here.

Total of 8 international T20 matches have been played on this ground from 2011 to 2018. India has played total of 4 matches here, out of which 2 have won and faced 1 defeats and 1 is abandoned.

In vivo IPL 2021, Eden Gardens of Kolkata is one of the primary venues. Match is about to start from 9th May. But Covid pandemic situation has turned the table up. The tournament has prosponed and is being thought of resuming soon.

Here you will get live pitch report update for upcoming matches to play at Eden Gardens.

Here Live Pitch Report Will Be Updated On The Match Time.