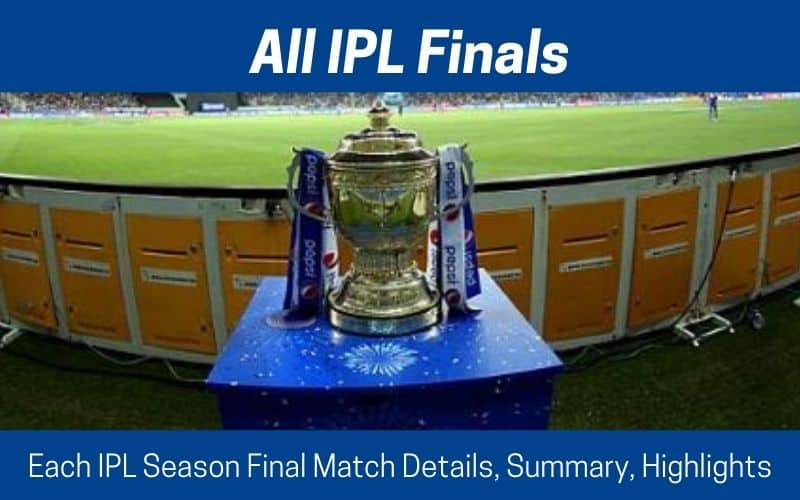 In this article, we will discuss about all IPL finals. You will get to know the Indian Premier League final matches summaries, highlights, most emerging players of those final matches, man of the match, etc.

The Indian Premier League (IPL) is the world’s largest T20 Cricket league. The Board of Control for Cricket in India (BCCI) put in place the league in 2008. It is usually held between March and May per year.

There have been 13 seasons of IPL tournament. Current IPL champion is Mumbai Indians. IPL season 14 (IPL 2021) is now postponed and it’s rest matches going to be rescheduled in UAE in September.

Yusuf Pathan made the base of winning RR the IPL 2008 title. He scored 56 runs out of only 36 balls, which includes 3 fours and 4 sixes. His run out was about to bring RR bad luck, but Aussie legend Shane Warne did not let that happen. 1st IPL champion title holds to Rajasthan Royals. Chennai team bowlers Muralitharan and Albie Morkel picked up 2 wickets each.

In CKS innings, Partiv Patel and Suresh Raina hooked up a good partnership and stored a good runs in scoreboard. After that, MS Dhoni’s finishing cameo took the score to 163. MS Dhoni contributed 29 out of 17 including 2 sixes and one boundary. In bowling, Yusuf Pathan attacked and picked up 3 wickets in 4 overs offering 22 runs. His all-rounding performance brought him the man of the match award.

Man of the match Anil Kumble took all spotlight on him though his team RCB lost in the final. Kumble took 4 wickets in final offering only 16 runs. He made a big impact for DC to stop getting high score. Harshal Gibbs picked up half century in finals and stopped scoring 53 out of 48 balls. Andrew Symonds and Rohit Sharma put rapid scores for DC.

In RCB innings, Roelef van der Merwe and Ross Taylor made the score to reach 137. Other players just simply failed to contribute. Robin Uthappa was not out till last ball but could not make RCB win.

Suresh Raina, one of the best left-handed top order batsmen in India and emerging player of CSK built the base of match winning. He made 57 runs playing only 37 balls. MS Dhoni, Murari Vijay and other batsmen contributed to build up a high score. Mumbai bowler Fernando took 2 wickets and 1 each for Zaheer Khan and Kieron Pollard.

While chasing the run, Mumbai Indians lost its track by losing wickets fast. Sachin Tendulkar played his way to chase and contributed 48 out of 45 balls. Other batsmen just came to the crease and then went back. At the last of the game, Kieron Pollard showed his cameo of 27 runs out of just 10 balls, but could not win the game.

Player of the match Murali Vijay and Mike Hussey, two openers just did what it needed to be done to win the game. Vijay’s 95 out of 52 and Hussey’s 63 out of 45 made chennai win the game. MS Dhoni made the finishing strike perfectly. RCB’s Chris Gayle and Arvind took two wickets each.

RCB could not create a single chance to win the game. To chase this high score, both openers failed, one of them was Chris Gayle. Virat Kohli and Saurabh Tiwary put some runs in scoreboard and helped RCB to less the difference. Ravichandran Ashwin took 3 wickets including both openers.

Chennai failed to win three concecutive IPL champion title. Top 3 batsmen, Mike Hussey, Murali Vijay and Suresh Raina did the score up to 190. Hussey scored 54 out of 43, Vijay 42 out of 32 and Raina 73 out of 38. Raina played the biggest strike to create huge score. MS Dhoni helped Raina to complete the innings in a spectecular way.

KKR start was just like the start for chasing high score. Opener Bisla’s 89 and Kallis’s 69 made the base of winning KKR the first IPL tournament. Shakib Al Hasan and Manoj Tiwary finished the game in style.

Carribean hard hitter batsman Kieron Pollard was the hero of Mumbai Indians winning the title. His 63 of 45 was one of the most splendid innings in IPL history. Though other players of Mumbai failed to build high score, that’s why after Pollard’s big knock, total run was below 150. Another carribean all-rounder Dwayne Bravo picked 4 wickets for chennai.

Last three tournaments most succesful top order badly failed in this match. MS Dhoni’s 63* out of 45 just less the difference. No other player was there to accompany Dhoni to win the title. Dhoni remained not out the whole innings.

One of the IPL’s high scoring match was 2014 final match. Both teams scored a total of 200 runs. In 1st innings, Wriddhiman Saha picked century in final. He made 115 runs playing only 55 balls. One of the fastest centuries in IPL. With Manan Vohra’s 67 out of 52, KXIP reached the mountain of runs in 2014 final.
Though the starting was lousy, Manish Pandey did not let KKR to loss the track. He scored 94 out of 50 runs and made kolkata win the title. Yusuf Pathan and Pandey’s partnership just made the whole road to win easy. Though KKR lost some wicket rapidly, Pyjush Chawla returned to the pavillion ensuring the win. Karanveer Singh took 4 wickets of KKR offering 54 runs.

Chennai did not make a good start. Darren Smith was exceptional in that innings. He made his way to put 57 runs in scoreboard. Other players could not play big innings and consequently, CSK lost the game. McClenaghan took 3 wickets and Harbhajan Singh and Malinga took 2 wickets each.

Ben Cutting’s all-round performance made SRH winning the IPL title. High scorer was David Warner. He made 69 runs playing 38 balls. Shikhar Dhawan and Yuvraj Singh also contributed handsome amount of runs. But Ben Cutting finished the match with a splendid innings. He played an innings of 39 runs just from 15 balls and stayed not out. Chris Jordan took 3 wickets for RCB.

Chris Gayle played an extraordinary innings of 76 runs out of 38 balls. His opening partner Virat Kohli also made 54 runs out of 35 balls. This opening partnership put 130 runs in scoreboard. After their fall, no other player could stand to make a big innings. Therefore, RCB lost despite of a splendid start.

One of the lowest scoring IPL matches in history. In Mumbai’s innings, Krunal Pandya managed to score 47 out of 38. 2nd highest individual is 24 made by Rohit Sharma. Other players could not make a chance to score high.

In Pune’s innings, 2 digit scorers are Ajinkya Rahane, Steve Smith and MS Dhoni. Steve’s 51 out of 50 and Rahane’s 44 out of 38 made Pune to challenge harder. The scorecard shows how nervous ending was in that match.

Shane Watson made IPL 2018 final match memorable by playing unbeatable 115 out of 57 innings. And also returned to the dressing room winning the game. Other players simply accompanied Watson. Only big innings of CKS’s innings was Watson’s 115*.

For Hyderabad, captain Kane Williamson and Yusuf Pathan drew the canvas of big score. Dhawan, Shakib and Charlos Brathwaite added some to reach near 180.

Another highly strung final match. In Mumbai’s innings, Kieron Pollard played a bomb-basting innings of 45 runs of 25 balls and remained not out. His innings made MI touch 149 and achive fighting score. Deepak Chahar took 3 wickets of MI.

Shane Watson made a good start but other players could not sustain. Though Watson’s 80 out of 59 led chennai to fight the hardest. But chennai could not take another two runs. Jasprit Bumrah with his best bowling figure (4/14) became player of the match.

Ishan Kishan’s 33 runs out of 19 balls tornado gave MI chance to put 150+ scores. Before, skipper Rohit Sharma did 68 runs of 51 balls and made the pillar of huge score. Kishan just built the total house.

But main job was done in DC’s innings. Kiwi bowler Trent Boult stopped DC to get high scores with his pace variations. DC’s player could not stand in front of his inswingers and bouncers. If Shreyas Iyas (65 of 50) and Rishabh Pant (56 of 38) failed that match, DC would have zero chance to cross 100.

IPL 2021 Season 14 final match is yet to play and after qualifying of top 4 team from IPL 2021 points table and then playoffs matches, we will know 2 finalist teams.