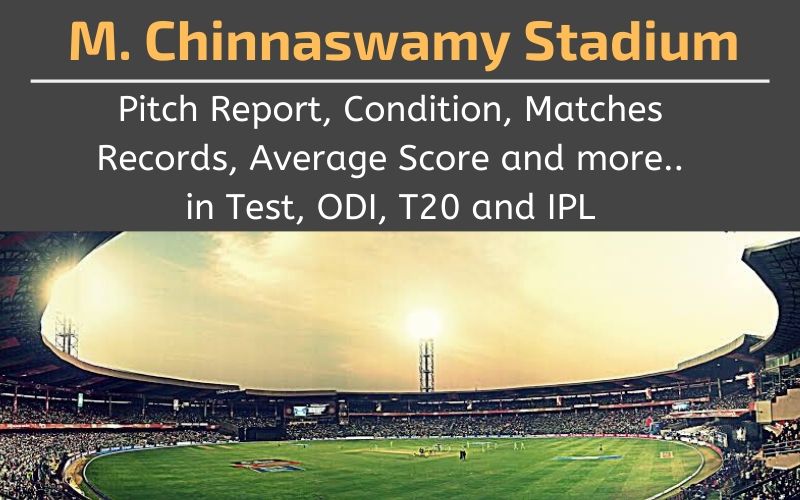 M. Chinaswamy Stadium pitch normally have grass on it which helps the fast bowlers but the also consider as the best batting pitch in limited overs Cricket. In Test cricket this wicket provide help to fast bowlers in all five days and in last days of the Test match spin bowlers also start getting help from the pitch. This is the a batting friendly pitch for T20, you will see lots of runs in both innings of the T20 game on this ground.

According to all four innings of the last five Test matches played at M Chinnaswamy Stadium, we can say that there are lots of runs made in the first innings and in the second innings. Here you will see very low score in the third and fourth innings because that time spin bowlers also come into the role and get help from the old pitch.

Toss Factor in Test: The team that wins the toss decides to bat first here. Because on the fresh wicket the pitch is batting friendly and the ball comes well on the bat. If a team batting first makes a score of 450+, then in that entire Test match that team will dominate for sure. The pitch here starts to help the spin bowlers from the last session of the second day.

In ODI one day International matches, the pitch here is very favorable for batting in the both innings. but according to the ODI matches average scores of both innings first innings has greater score than the second innings.

Toss Factor in ODI: Here the pitch remains the same in both two innings, the ball comes well on the bat. The first bowling team has won 2 and the team batting first has won 3 matches. If the team batting first makes a big total, then they can put pressure on the other team. However the toss is more depend on the team weaknesses and strengths.

As you can see the average score of these last 5 T20 matches of M. Chinnaswamy Cricket ground, the second innings has scored more than the first innings so it can be inferred that chasing on this pitch also not the bad choice in T20 International matches.

Toss Factor in T20: The team that wins the toss at M Chinnaswamy Stadium in a T20 International match decides to bowl first as pitch is good for batting and here the score can be easily chased.

According to these last 5 IPL matches both innings average score at M. Chinnaswamy stadium, we can say that there is no such difference because all the last 5 matches were very close so it can be inferred that in IPL matches both T20 innings get big scores and it is a High scoring ground for IPL.

Toss Factor in IPL: Toss depends on the team’s weaknesses and strengths, the pitch helps to batsmen and if the toss winning team has a good batting lineup then they will go with bowling first the decide to chase the score.

In limited-overs cricket and winter season, dew shows its effect on this ground, so the team that wins the toss prefers to bowl first. In Test cricket you will see grass on the pitch and in T20 games and in IPL you will see hard wicket which made for high scoring games. Spinners also get help from the pitch in limited overs game.

The ground is very small and you will see many sixes here in T20, we can’t forget that this is the ground where Chris Gayle made T20 Cricket’s highest score of 175 runs in IPL.

Now we will know all Cricket formats matches records at M. Chinnaswamy stadium, we will share here last 5 matches records, scorecards of all formats, so that you can know how this pitch behaves in all 4 test innings, both ODI innings, both T20 innings, also you will be able to inferred scores in all innings which can help you play and make your team in dream 11 or any other Fantasy Cricket platforms.

Total 23 Tests have been played at this ground from 1974 to 2018, out of which India has won 8 matches, lost 6 matches and drawn 9 matches. Last Test match of India at this ground was played with Afghanistan on 14 Jun 2018, India won that match by an innings and 262 runs.

Innings: (After first day rain was started and the match was incomplete thus it announced as Drawn)

Total 26 ODIs One day international matches have been played on this ground from 1982 to 2020. India has played total of 21 matches here, out of which 14 have won and faced 5 defeats and 1 match is tied. 1 Matches is abandoned due to Rain.

Total of 7 international T20 matches have been played on this ground from 2012 to 2019. India has played total of 5 matches here, out of which 2 have won and faced 3 defeats.

Vivo IPL 2021 is prosponed due to unavoidable circumstances. It will resume shortly in venues of UAE. In M. Chinnaswamy stadium, 1st match was supposed to execute on 9 May 2021.

Here you will get live pitch report update for upcoming matches to play at M. Chinnaswamy Stadium