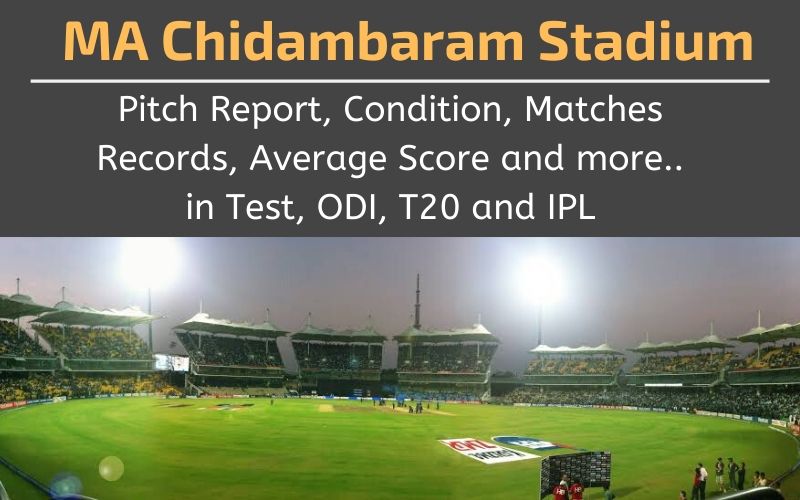 The pitch of MA Chidambaram Stadium is normally dry and hard, which breaks down as time passes. You will not see green grass at all on this pitch. Being dry and hard pitch, it is easy to bat in the first two innings on this pitch. With the passing of time on this pitch, the pitch begins to erode with the foot marks of the bowler and due to the heat, cracks are also seen on the pitch which helps the spin bowlers. If the batsmen have the ability to play spin, then the match goes to the fourth innings. Here in the third innings, runs are scored less than the first two innings and in the fourth innings, very few runs are made because here the ball starts to spin too much.

As we have seen all 4 Test innings average scores of last 5 Test matches at MA Chidambaram Stadium, we can say that in first 2 innings there are lots of runs are made and if the Batsmen is technically sound with the spin bowling so in third innings also can be made good score but once spinners start to get good turn on this Chepauk wicket then it becomes difficult to make runs in third and fourth Innings. It can be clearly inferred that in first three days of the Test match, batting is lot easier and slowly this pitch starts to be difficult for batting on fourth and fifth day.

Toss Factor in Test: The team that wins the toss always decides to bowl first on MA Chidambaram Stadium wicket in Tests, because the pitch here is dry and hard which is known as batting surface. Here the batsmen of the top order bat well and also score lots of runs in first days of the Test match. It is very easy to bat here in the first and second innings, due to which the team here can score 350+ runs in the first innings and 450+ runs in the second innings. If the team takes the lead in the second innings, then the spinners in the third and fourth innings are helped by the footmarks and pitch cracks..

Test Matches Winning Record at MA Chidambaram Stadium: In the last five Test matches played here, the team that bowled first has won 3 matches and 2 matches didn’t had any result.

Toss Factor in ODI: Here in the last five matches, the team batting first has won 3 matches because in the first innings the ball comes well on the bat and it is easy to score. The pitch slowly starts give turn to spin bowlers in second innings and also the wicket starts being slow, it is difficult to chase the score. Here the team that wins the toss decides to bat first.

As you can see the average score of these last T20 International matches both innings are same, as the pitch stays dry and hard, here are lots of runs are made in T20 matches.

Toss Factor in T20: The toss is not so important on this pitch for T20 matches, but team winning the toss normally decides to bat first and huge score in the first innings puts pressure on opponent team.

According to the last 5 IPL matches played here, 170+ runs have been scored in 2 matches and the remaining three matches have been scored 150 runs, because there are 3 to 4 pitches here when there is a match on the fresh pitch, then you will see 170+ runs but if the match is being held on the old pitch, then the score of 150 or under 150 runs will be seen.

Toss Factor in IPL: Here the team that wins the toss will want to bat first because in the second innings the wicket here becomes slow. Because of which sometimes it becomes difficult to chase the score.

This ground is in south of India in Chennai that’s why here is very hot temperature which makes the pitch dry and hard.In first innings fast bowlers get some good bounce and pace but in second innings the pitch starts helping to spin bowlers.

Now we will know all Cricket formats matches records at MA Chidambaram stadium, Chennai. We will share here last 5 matches records, scorecards of all formats, so that you can know how this pitch behaves in all 4 test innings, both ODI innings, both T20 innings, also you will be able to inferred scores in all innings which can help you play and make your team in dream 11 or any other Fantasy Cricket platforms.

Total 23 ODIs One day international matches have been played on this ground from 1987 to 2019. India has played total of 14 matches here, out of which 7 have won and faced 5 defeats. 2 Matches is abandoned due to Rain.

Total of 2 international T20 matches have been played on this ground from 2012 to 2018. India has played total of 2 matches here out of which 1 have won and faced 1 defeat.

2021 IPL has prosponed due to recent pandemic. It will resume approximately in september.

Here you will get live pitch report update for upcoming matches to play at MA Chidambaram Stadium, Chennai.