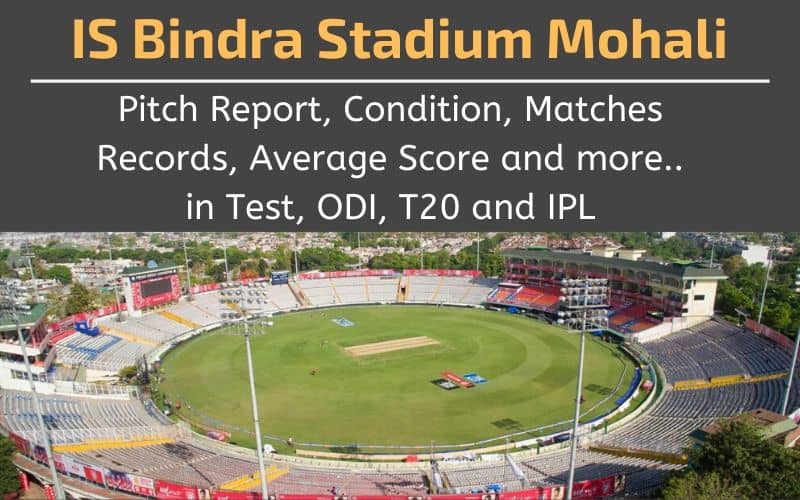 Indrajit Singh Bindra Stadium Mohali was earlier known as Punjab Cricket Association Stadium, Mohali. This Cricket stadium is one of the biggest stadiums in India.

Green pitches are often seen at Punjab Cricket Association IS Bindra Stadium Mohali and this pitch proves helpful for fast bowlers. The batsmen have to be careful in the beginning, swing can often seen in the first innings in a test match because there is grass on the wicket but as time passes, the pitch becomes slow. It becomes easy to bat in the second and third day of a Test match. On the fourth and the fifth day, due to the foot marks of the bowler, the ball starts to turn very much, on the fourth and the fifth day the spin bowler dominates.

As we have averaged all the 4 Test innings of the last 5 Tests of IS Bindra Stadium Mohali ground, we can say that lots of runs are scored in the first innings and second innings and very few runs are scored in the third and fourth innings. It can be clearly inferred that on the first day and second day in a Test match the pitch looks batting friendly, but the best batting conditions will be in the second day of the Test when there will be lack of swing than the first innings. And on the third, fourth Test innings according to the average scores, this Mohali pitch becomes difficult to bat.

The team that wins the Test match toss on Mohali pitch, always decides to bowl first because there is green grass present on the pitch, which gives the fast bowlers swing in the early hours, the top order batsmen in 1st innings need to manage the swing. It becomes very easy to bat here in the second innings, due to which the team in 2nd innings can score up to 360+ runs. The pitch in the second innings does not help the bowler as much as the first innings. Then in the third and fourth innings the pitch starts providing help to the spin bowlers.

Don’t go with these average scores as among these all last 5 matches here, one match had very high score in the first innings which was 392 runs but rest of the matches have similar scores of the 2nd innings average score, so that’s how we can say that chase is easy on this ground and both innings gets similar amount of runs.

Toss Factor in ODI: Here in the last five matches, the first bowling team has won 4 matches because the becomes more betting friendly in the second innings in ODI and the ball comes well on the bat and so it becomes easy to chase runs.

ODI Matches Winning Record at Mohali IS Bindra Stadium: Here the team batting first has won only one match in last five ODI matches and that was also because of the very High score by the team which was 392 runs. In the rest 4 matches bowling first team has won all 4 matches.

As you can see the average score of these last 5 T20 matches on this Mohali ground, the first innings has scored more than the second innings. So it can be inferred that normall first innings bit helpful for the batsman but yeah there is no such big difference in both innings average scores, so for your dream team always go according to both teams strengths and weaknesses.

Toss Factor in T20: Toss is not so important in T20 on IS Bindra Mohali stadium as it has been here that both innings have similar amount of runs and a team can also chase score here. So in T20 at Mohali, the batting first or bowling first choice is just depends on the opponent team strengths and weaknesses.

According to these last 5 IPL matches both innings average score at Mohali IS Bindra Stadium, we can say that there is no such difference because all the last 5 matches were very close and chasing score team won 4 matches on this ground in IPL, so we can inferred that both innings get almost same runs but normally team chasing the score wins the match.

Toss is not so important but according to the last five IPL matches winning records we saw that team chasing the score wins the 4 matches and 1 match was won by the first batting team. You can enjoy High Scoring Matches in IPL.

In IPL at Mohali, Mohali IS Bindra Stadium team chasing the score won more matches than the team batting first. Team who bowled first won total 4 matches out of last 5 IPL matches at this ground and team batting first won 1 match and that was also too close margin match.

Usually green grass will be seen on the pitch here, but according to the pitch curator, due to the intense heat in the summer season, there will be lack of green grass on the pitch, for which it becomes easy to chase the target in limited overs cricket on this pitch. That’s why the team that wins the toss prefers to bowl first. The pitch at IS Bindra Stadium Mohali helps the spin bowlers a little. Here because of the green outfield, the shine of the ball remains for a long time, and for the fast outfield, the ball moves rapidly towards the boundary line.

The distance from the center of the pitch to the boundary is about 68.58 meters all around the ground. (Wikipedia)

Now we will know all Cricket formats matches records at Mohali IS Bindra Stadium, we will share here last 5 matches records, scorecards of all formats, so that you can know how this pitch behaves in all 4 test innings, both ODI innings, both T20 innings, also you will be able to inferred scores in all innings which can help you play and make your team in dream 11 or any other Fantasy Cricket platforms.

Total 13 Tests have been played at this ground from 1994 to 2016, out of which India has won 7 matches, lost 1 match and drawn 5 matches. Last Test match of India at this ground was played with England on 26 November 2016. India won that match by 8 wickets.

Total 25 ODIs One day international matches have been played on this ground from 1993 to 2019. India has played total of 16 matches here, out of which 10 have won and faced 6 defeats.

Total of 5 international T20 matches have been played on this ground from 2009 to 2019. India has played total of 3 matches here, out of 3 have won.

In Vivo IPL 2021, this stadium is not taken as venue. IPL management assures to provide zero home advantages to any team. This stadium is home ground for Punjab Kings. Now, IPL 2021 is prosponed and will resume shortly.

Here you will get live pitch report update for upcoming matches to play at Punjab Cricket Association IS Bindra Stadium, Mohali.