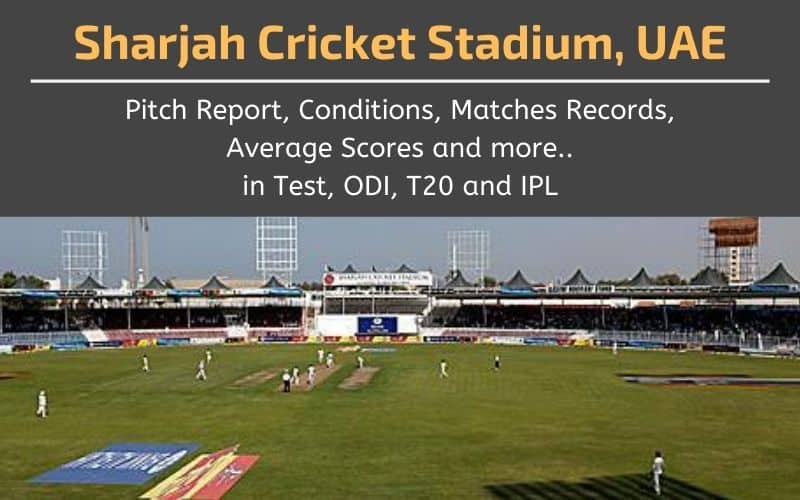 Sharjah Cricket Ground is situated in the City of Sharjah, UAE, the stadium was established in 1982. The two ends of the stadium are the Pavilion end and the Sharjah club. The no. of ODI played is highest in UAE on this stadium specifically. The throw-back, the first ODI played on this ground was on 6 April 1984. The Sharjah Cricket Stadium has become the home ground now to the Afghanistan cricket team for One Day International and First-Class matches. Later, in 2016, Afghanistan changed their home ground and decided the Greater Noida sports complex in Uttar Pradesh India. Controversies followed by this pitch was quiet in the discussion. The owner of the Sharjah Cricket Stadium is Sharjah Cricket Association. The seating capacity of the stadium is 27,000. 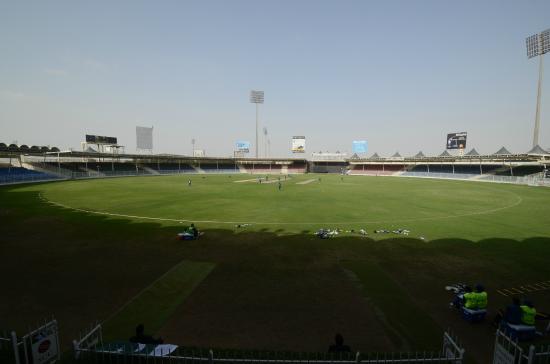 Sharjah Cricket Stadium pitch is dusty/dry, the pitch is harder favors to pacers. Once the batsmen understand the movement of balls, they get a chance to build high targets. The cracks are formed overnight on this pitch, as the humidity and moisture content of the stadium region is high. The cracks look like tiles, having light patches of grass, this in regards to batsmen, but, mainly as bowlers don’t get enough bounce to let to make the batsmen stroke for a wrong shot. Wrong strike might help bowlers to break partnerships. The warm winds decides the moisture content of the pitch. Conditions and weather of the day, which are dynamic in nature and are responsible for the semi-arid conditions of the pitch. All over, the pitch is in fine condition. The only issue is that the unoccasionally arrival of rains had deteriorated the maintenance of pitch before.

In the first days of the test match, the Sharjah Cricket Stadium Pitch behaves as batting friendly, and then it becomes harder to bat on. Spinners start to get help from the footmarks and pitch cracks. In the first innings, if there is lack of swing then top-order and middle-order batsmen will enjoy batting here with good partnerships. In hot sunny days of Sharjah, UAE, the pitch becomes harder and bowl comes on bat very well.

The toss is an important aspect of a test match, mostly on the Sharjah ground. The win of toss makes a captain bat first in most of the situation, by keeping in the mind of regarding that, what types of conditions of pitch is or will be at the end of the day. The records speak that the fresh opting for batting usually helps the team to form longer partnerships.

The first innings score might cross 300+ in any conditions. But it also depends on the form of batsmen, that how he/she is performing from last innings. Since the bowlers have to wait for the spells of 3rd or 4th innings to get some wickets. At the end of innings, there is a great opportunity to grasp wickets as batsmen can make a slight mistake, and after which a bowler can grasp the wicket. Spinners also may change the directions of the match at the end of the day.

Here are the last 5 test matches average scores of all 4 Innings at Sharjah Cricket Ground:

So, from the average scores in the all 4 innings of the last 5 Test matches at Sharjah Cricket ground, we can conclude that the first innings have a higher average comparatively and with each subsequent innings, the average score collapse, while looking at the last innings it is very much low which is usually recorded at other UAE grounds as well. Overall average score deteriorates throughout the innings.

Subsequently, that it is easy for batsmen to score runs on the first two days as there swing is in minor, which is the direct link to their on-pitch performance. The bowlers have to bowl a lot to get grasp some wickets, so they can break partnerships, but as the days pass, though the wicket gets flatter, the spin bowlers can help their team to decrease the run rate of opposition. Vice-versa it affects the overall consistency of batsmen to build a scoreboard.

In the format of the test, on this stadium, the first test was played on 31/01/2002. The highest run chased was 302/5. Matches won here on the neutral side are 8. And 1 match is drawn, and the matches won batting first are 4 and bowling 4 out of total tests played. So, most of the team who had opted for batting first had won the most of the matches. Highest total in an innings is 690/10 made by NZ against Pakistan in 2014.

Sharjah Cricket Stadium pitch in ODI is quite batting friendly in the first innings and then bowlers start getting help from the pitch. If the bowlers manage to get the swing then it could be difficult for batsmen, also spinners on this pitch get great help for turn and bounce. Dry and hard wicket makes batting easy, one who can spend time on the pitch can make big score as a batsman. As it is a batting pitch, the team winning the toss in ODI at Sharjah cricket ground always prefer batting first. Of the 241 total matches played here, 129 teams have won batting first. And bowling first are 110 wins. Any team, after losing the toss moreover also had some % of winning, if they spell some brilliant overs, which may help them to break the set partnerships.

In the case of One Day International matches, the pitch condition is similar to the scenario of Test matches. In the last five matches played here, the team batting first has managed to score more runs mostly, which are approximately 235+. And the records of the partnerships also speaks a lot regarding the stadium.

In the last five matches played here, 4 teams have won by batting first. The highest total chased is 285. Also, the inertia of the scoreboard depends upon the form of opening partners. The scoreboard is always built at the start and end of the death overs. Highest total in an innings is 364/7(50 Overs) made by Pakistan against NZ.

Though the ground has a batting pitch, unusual to the case of ODI and Test matches where teams choose batting first, the teams that win the toss in T20 matches here prefer bowling first. This is considering the dew factor. As most of the T20 matches are day-night matches or completely night matches, the dew falling and wide cracks on the pitch makes it difficult for the bowlers to control the ball in the second innings contrary to the usual case in Test or ODI matches held during the day.

Here are last 5 T20 matches average scores of both Innings at Cricket Ground:

From the average scores of the last 5 T20 matches, it is evident that though the average score in the first innings is slightly higher than the second innings, teams batting in the second innings have managed to chase the score in some cases. In fact, teams bowling first have won more matches. Of the 14 T20I matches played here, 4 matches were won by teams batting second.

The pitch usually designed for IPL individually for entertainment purposes. The cracks might get introduced with pitch, as the purpose of IPL is excitement and unknown end of the match results. Flat and dry wickets assist the batsmen as well as bowlers in some conditions. Toss plays a major role in predicting the winning team in IPL matches so far. But it has been noticed that teams winning the toss prefer bowling first just like in the case of T20I matches considering the effect of dew on the pitch.

The total no. of IPL matches hosted in this stadium is 19. Yet this no. of matches are insufficient to decide whether the ground is suitable for IPL tournaments. So, the batting first has won the 14 matches, and balling first had won the rest of matches.

In Test and ODI matches, the hot day and the dry flat pitch favors batting and the teams winning toss prefer to bat first, same as the other. Spin bowlers can help cut down the chase in the second and third innings because the flat pitch and the footmarks cause a good spin and basically a general cause. But in T20 and domestic limited-overs matches, dew has a great effect on teams batting second, and hence the teams winning the toss prefer bowling first these conditions are ultimately similar to other rest of the stadium which hosts the IPL tournament.

The distance between the two pavilion ends is 133 meters approximately. 62 meters boundary in long and 57 meters in staright.

Here, we will be sharing the results and scorecards of the last 5 international matches played in each format in Sharjah Cricket Stadium. This in addition to the detailed pitch report and ground conditions explained before will help you develop an understanding of the pitch behavior in all four innings of Test matches and both innings in case of ODI and T20 matches. This will aid in predicting the scores which can help you play and form your team in Dream11 and other similar Fantasy Cricket platforms.