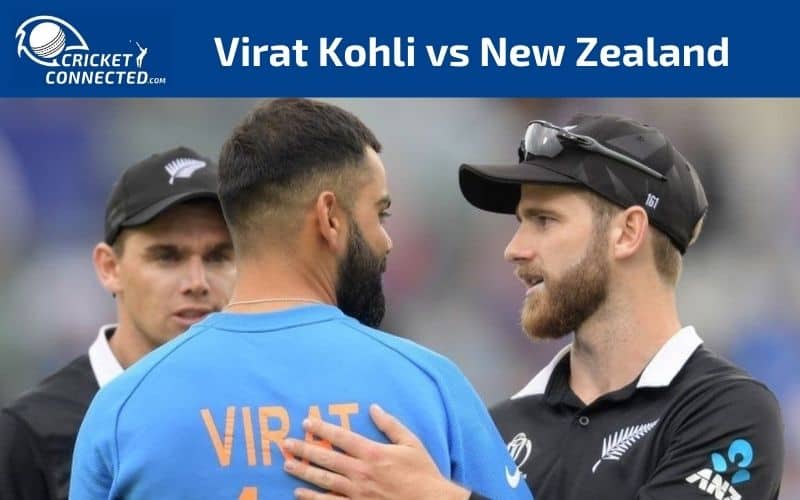 In this article, we will discuss about batting performance of Virat Kohli vs New Zealand Cricket team. We will get to know about his batting records, performance, skills, stats against New Zealand in all three formats of Cricket.

Virat Kohli, current skipper of Indian Cricket team, is one of the best batsmen that team India ever had. He does not believe in passive resistance, he is a proponent of all-out aggression.

He scored his highest test innings score in 2016 against New Zealand.

Virat Kohli has performed much better against Kiwi bowlers. Tim Southee has the most dismissal record against Virat Kohli.

He dismissed Kohli three times in five tests. Kohli has also struggled against Kyle Jamieson, NZ fast bowler. For spin bowlers, Kohli has not struggled much.

In ODI, again the name Tim Southee rises. In ODI, Southee has made a record of six times dismissal of Virat Kohli.

Another Kiwi pacer Trent Boult has also troubled Virat Kohli with his inswingers, especially in powerplays.

In T20I, New Zealand Cricket team has not played much against India. Only 17 T20Is are played between these two countries. As a result, in T20I format Virat Kohli does not have much matches against NZ. But in these 9 matches, he has managed to prove himself as an essential part of the Indian T20I Cricket team.

His strike rate is 145.89 which is much better than the other greatest batsmen played against NZ in T20I. He has also made huge runs from boundaries. Though he has no centuries against New Zealand in T20I.

When it comes for T20I, Ish Sodhi, NZ spinner, has made impact on Kohli’s playing. Though Kohli is excellent at tackling spin bowlers, he has struggled much in front of Sodhi.

Records and Milestones against New Zealand

Indian captain Virat Kohli has been in tremendous form over the past few years. His knack of breaking records has seen him overhaul a number of legends of the game in the past couple of years. Its, however, very rare when the Indian skipper has had a bad day on-field and what’s rarer is that he has a bad series.

Virat Kohli, the master chaser of India, pulled off a thrilling run-chase in the 2nd Test of New Zealand’s tour of India in 2012. New Zealand fought hard throughout the game to come out on top against India’s top order, and they were rewarded with three early wickets.

Virat Kohli came to the pitch and offered an extra ordinary innings of 51 runs. In that match, he also scored a rocking century. His 51 runs knock helped India to chase the target and win the game.

After the game, he became only the 6th Indian batsman to score a hundred and a fifty in the same match against New Zealand.

In Wellington test, 2014, Kohli scored a fantastic century and remained 105 not out at the end of the innings. At that match, India was out of line losing three wickets. The match winning probability was in hands of black caps.

Kohli came to the crease and stitched a match-saving partnership with Rohit Sharma to ensure that India batted right through to the end to save the Test match.

Virat Kohli’s most famous and spectacular innings was in Indore test, 2016. In 3rd test, he made a record of 211 runs out of 322 balls which is his highest score against NZ in test.

He made a tremendous and match winning partnership with Ajinkya Rahane. It led India to hand New Zealand a huge defeat.

Along with some good memories and records in ODIs and Tests, Virat Kohli could not make much prosperity in T20I against Kiwis.

In recent times Kohli could manage to score just 75 runs in three innings against the Kiwis (51, 15 and 9) and his average reads 25. This is the lowest series average that Kohli has recorded in the last five years. New Zealand won that ODI series in 2-1.

So these are the batting performance stats and records of VIrat Kohli against New Zealand Cricket team at large. The former No. 1 rank holder in ICC ODI rankings has gifted us brilliant and eye-catching innings against New Zealand.

He has exhibited his batting excellence against Kiwis as well, even successfully chasing huge totals under pressure batting at the third position and fourth position in the batting order.