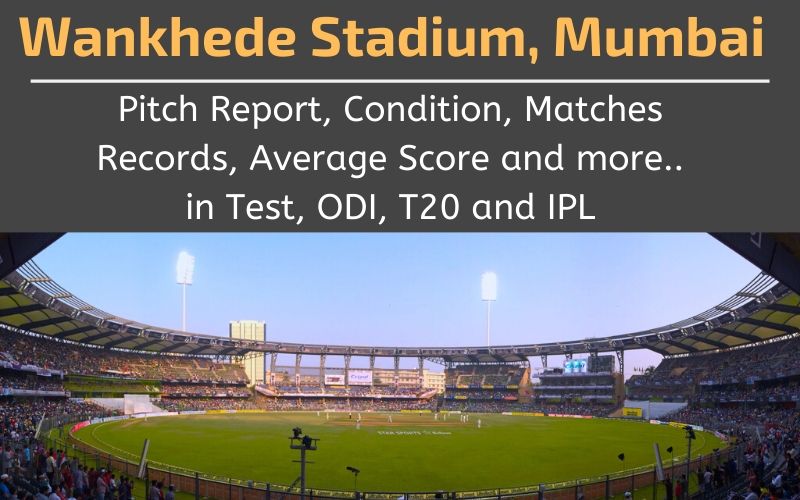 At Mumbai’s Wankhede Stadium, the pitch is always batting friendly, here batsmen get help and the pitch is less helpful to for bowlers, this pitch is made of red clay which makes the surface very tough and the bowlers get extra bounce. In the Test match, there is no spin in the beginning here, but with the passing of time, from the third day the ball starts to turn very much, the fourth and the fifth day is dominated by the spin bowler, the pitch here is prepared in this way, so that the decision can come out. In a one-day match, the wicket here does not break soon, due to which the spin gets very less, but the fast bowlers get swing with extra bounce and in the one-day matches, the team likes to chase after winning the toss on the wicket here. This is a great pitch for T20 matches, due to good bounce here too many runs are made and for the spectators, there is a lot of entertainment here.

As we have seen all 4 Test innings average scores of last 5 Test matches at Wankhede Stadium, we can say that in first 2 innings there are lots of runs made and very few runs made in the last 2 innings. It can be clearly inferred that in first days of the Test match, batting is lot easier and slowly this pitch starts to be difficult for batting.

Team winning the toss always decides to bowl first because in the initial hours on the fresh pitch. Batsmen need to be managed the swing. But after the ball becomes bit older, it becomes easy for the batsman to score runs here. Even if you do not get a good start from the top order, middle order can score up to 380 runs total of 1st innings in Test match. It becomes very easy to bat here in the second innings because the pitch does not help the bowler as much as it helps in the first innings. If the team takes the lead in the second innings. Spinners get help from the foot marks of the fast bowlers, also the uneven bounce, along with the ball turning due to the extra bounce, becomes a very difficult for batsmen. Very few scores are made in third innings and 4th innings.

Don’t go with these average scores as among these all last 5 matches here, one match had very high score in the first innings which was 438 runs but rest of the matches have similar scores of the 2nd innings average score, so that’s how we can say that chase is easy on this ground and both innings gets similar amount of runs.

Toss Factor in ODI: It has been seen that the team that wins the toss on this ground always choose bowling first because it is easy to chase the score here.

ODI Matches Winning Record at Wankhede Stadium: Here the team batting first has won only one match in last five ODI matches and that was also because of the very High score by the team which was 438 runs. In the rest 4 matches bowling first team has won 4 matches because the ball comes well on the bat in the second innings, chasing the target becomes easy.

As you can see these last T20 matches average scores, in first innings there are more runs made than the 2nd innings so batting first team can score more runs on this pitch in T20 and its easier to batting on fresh wicket. Wankhede Stadium is very popular for its T20 Wicket, in first innings you will see lots of runs from batsmen.

Toss Factor in T20: Toss is not so important here in T20 but still winning toss team would like to bat first on this wicket to put pressure on the other team and thus they can defend the score only if they have quality bowlers, specially fast bowlers.

According to these last 5 IPL matches both innings average score at Wankhede stadium, we can say that there is no such difference because all the last 5 matches were very close and chasing score team won 3 matches on this ground in IPL, so we can inferred that both innings get almost same runs but normally team chasing the score wins the match.

Toss is not so important but according to the last five IPL matches winning records we saw that team chasing the score wins the 4 matches and one match was won by the first batting team in Super Over.

In limited overs Cricket and in winter season, dew shows its effect, so the team that wins the toss prefers bowling first. The pitch of the Wankhede Stadium gets a little extra Bounce during the day time, if the bowler has good speed and the ability to hit the bouncer then he can annoy the batsman. This ground is very close to the sea, due to which changes in the mood of the pitch are seen from time to time, due to this the pitch here becomes a spin pitch and sometimes provide help for swing bowlers.

According to Wikipedia distances from the center of the pitch to the boundary is about 70 meters all around the ground.

Now we will know all Cricket formats matches records at Wankhede stadium, we will share here last 5 matches records, scorecards of all formats, so that you can know how this pitch behaves in all 4 test innings, both ODI innings, both T20 innings, also you will be able to inferred scores in all innings which can help you play and make your team in dream 11 or any other Fantasy Cricket platforms.

Total 25 Tests have been played at this ground from 1975 to 2016, out of which India has won 11 matches, lost 7 matches and drawn 7 matches. Last Test match of India at this ground was played with England on 8 December 2016, India won that match by an innings and 36 runs.

Total 22 ODIs One day international matches have been played on this ground from 1987 to 2020. India has played total of 19 matches here, out of which 10 have won and faced 9 defeats.

Total of 7 international T20 matches have been played on this ground from 2012 to 2019. India has played total of 4 matches here, out of which 2 have won and faced 2 defeats.

Vivo IPL 2021 is now prosponed and will resume shortly in UAE. As Mumbai is recognised one of the venues of IPL 2021, 8 matches have played here before prospone.