Which Teams Never Won IPL and Why (Know Probable Reasons) 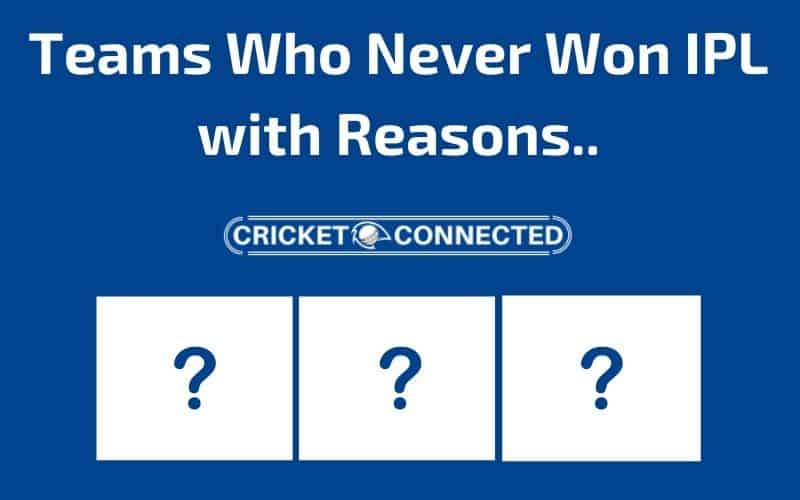 It doesn’t mean that they didn’t play well, but every time the opponent proved themselves better than them. They struggled very much in every season but didn’t able to get their first Indian Premier League title.

There are also some teams that even have played the final of IPL but were unsuccessful to win the season. So here we convey some information about these teams and also take a glimpse of their carrier in IPL so far.

This team has the most eminent names of the cricket world but they disappoint their RED ARMY in every season of IPL. Their batting order is still the dream of some teams. But their collective performance is not good enough to win the title.

The second time they played the final in 2011, and this time RCB was in trouble because they are facing the strongest team of the IPL history and the best captain of the cricket history, they were facing CSK under the captaincy of MS Dhoni. They lost the match by a huge difference of 58 runs and this time CSK tramped down their hope of the first title.

Talking about the third time they entered the final of IPL 2016 this time Virat Kohli, the RUN MACHINE, was the captain of RCB. This time they were facing SRH. They were also on the verse of the wining of their first-ever IPL but that was a close match and RCB lost the match by only 8 runs. This time SRH ruined their hope of the first title.

Besides that RCB hasn’t won any title yet they are living in millions of hearts of their fans. In every match, you can see the RED ARMY in the stands and can also hear their roar. In every season their fans come back with a new hope that the RCBians win the title this time.

Here are a few reasons why Royal Challengers Bangalore never won any IPL season yet:

Punjab Kings team has played only one final of IPL and that time the captain was George Bailey, they made it in IPL 2014. This time each and every player of this was on the top of their respective carriers. They were scoring well, spending less, taking wickets, and fielding well. They were on the top of the points table in that season and their hope of winning the first title was also very strong.

They faced Kolkata Knight Riders in the final. The match was very tense and amazing. The victory was switching the sides ball by ball. There was a time when PBKS winning the match but the tail-enders of the KKR played very well under pressure and snatched the match from PBKS and their hope of winning the first-ever IPL title was tramped down.

Here are a few reasons why Punjab Kings never won any IPL season yet:

Delhi Capitals have even never played an IPL final and also this team is the only one team that hasn’t qualified for the final yet. So they have the worst record on paper. But they have played some qualifiers and that is memorable and heartbreaking as well for them.

In 2012, they were on the horses of victory they played very well and topped the points table by winning 11 out of 16 matches they had played. Virender Sahvag, the SMASHER, was the captain that year. But they lost both of the qualifiers.

The second time they were in the playoffs in 2019. In 2019, the team was the youngest team of the IPL because the team had all young players. And they pulled their team in the playoffs after seven years. Shreyas Iyer was the captain of the team. That year unfortunately they faced CSK under the leadership of MS Dhoni in qualifier 2 and DC lost the match by 6 wickets.

Here are a few reasons why Delhi Capitals never won any IPL season yet:

Talking broadly there are also four more teams that haven’t won any title yet we can also call them as IPL guest teams as their tenor in IPL was very short.

Firstly we have Pune Warriors, this wasn’t the full-time team of IPL, and the tenor of this team in IPL was only two years i.e. 2011 and 2012. And they were not able to win any title in this short time. The team was taken out of the IPL because of some financial reasons.

Secondly, we have Kochi Tuskers Kerala. This team played only one season of the IPL. They played the IPL 2011 and weren’t able to win the title.

The third one is the Gujarat Lions they were played the IPL for two years because the two of the permanent teams IPL was banned for two years. They played two seasons of the IPL in 2016 and 2017. But they were not able to win the title in any of the years.

The fourth team is the Rising Pune Supergiant. They also played two seasons of the IPL (2016 and 2017) because of the implementation of the ban on CSK and RR for two years. But they also were not able to win the title even after playing one final of IPL 2017.