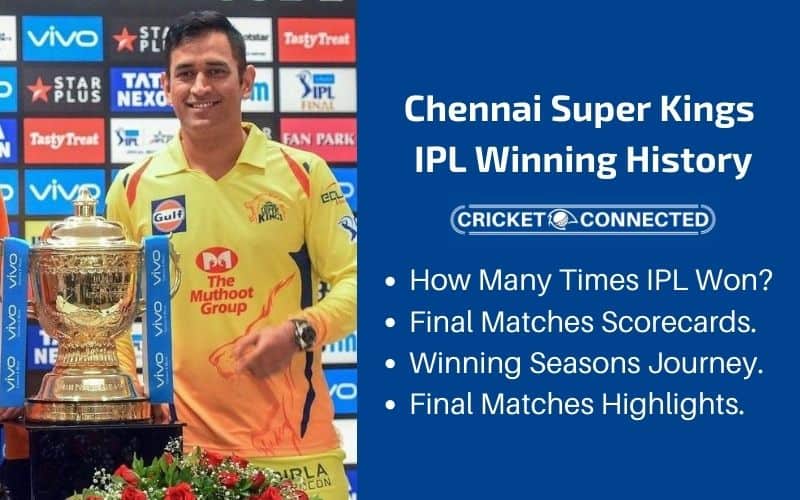 Chennai Super Kings, the real kings of the Indian Premier League. As they have a glorious history in the IPL we can say that the CSK team is the real king of IPL. With the perfect balance of experience and youth and most importantly the leadership of captain cool MS Dhoni, it seems like they are invincible in IPL.

CSK team has won IPL three times 2010, 2011, and 2018 and 5 times runner up in the 12-year of IPL history. It means, the CSKians have played the finals 8 times, if excludes the 2 years of the ban, there are only two IPL finals that are played without Chennai Super Kings. Whatever the reason but the CSKians played awesome under the leadership of MS Dhoni.

CSK IPL Final Matches History (as Winner and as Runner Up):

This time CSK was at no. 3 in the points table after the league matches by winning 7 matches. They played 2nd qualifier against Deccan Chargers at Dr. DY Patil Sports Academy, Mumbai on April 22, 2010. Chennai Super Kings won the toss and opt to bat first. CSK scored 142 runs by losing 7 wickets. This was a good score for final but they were facing one of the best batting line-ups of IPL the Mumbai Indians. Doug Bollinger from the side of CSK took 4 wickets by spending only 13 runs in 4 overs. Deccan Chargers are hardly able to score 104 runs and lost all of their wickets. CSK won that match by 38 runs and entered in final.

IPL 2010 the final match was played between CSK vs MI, both were good enough to lift the trophy. But the plus point was by the side of CSK that they have played a final before in the first season in 2008. The match was played in Dr. DY Patil Sports Academy on April 25, 2010. Chennai Super Kings won the toss and opt to bat first. CSK bat first and scored 168 for 5 that was a handsome score for final. It’s time for the bowlers to show their strength. The batting order of the MI was good enough to tackle that score and they were ready too. But the pressure of final played a very crucial role and the bating batting line up of MI was crashed like a plane of paper they lost 9 wickets and hardly managed the score of 149. And the CSK won the match by 22 runs and became the IPL trophy winner. Suresh Raina was the man of the match.

IPL 2011, it was the fourth season that was being played. CSK was at first place in the points table by winning 9 matches. Qualifier 1 was played amongst CSK and RCB at Wankhede Stadium, Mumbai on May 24, 2011. Chennai Super Kings won the toss and opt to bowl. RCB bat first and scored 175 runs by losing 4 wickets. CSK was in hard times after losing 2 wickets in the first two overs. But Suresh Raina played a long innings. He scored 73 runs in 50 balls with a strike rate of 146. CSK hit the target in 19.4 overs and won the match by 6 wickets. By winning that match CSK qualified for the final.

The final match was played between CSK vs RCB in M.A. Chidambaram Stadium, Chennai on May 28, 2011. Chennai Super Kings won the toss and opt to bat first. Because of the partnership of M. Hussey and Murali Vijay CSK was able to score the mountain of runs 205 by losing 5 wickets. Their bowling order was also pretty good. On the other hand, RCB was able to score only 147 runs by losing 8 wickets and kneel against the bowling of CSK. Murali Vijay was the man of the match. The CSKians collectively played fabulously and tramped down RCB and their hopes of the first title. CSK won the match by huge difference and lift the IPL trophy. 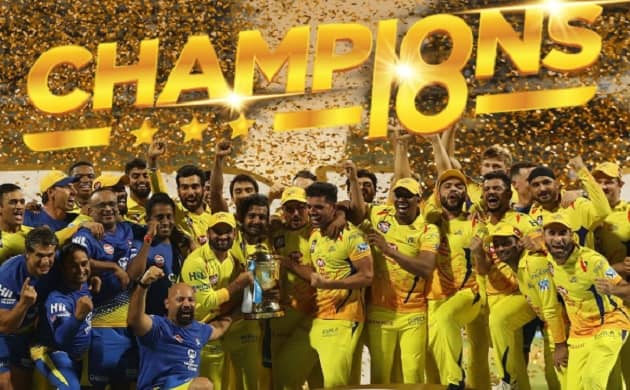 IPL 2018, this season was very important for CSK because they are playing after two years of ban. After the league matches, CSK was at 2nd place in the points table by winning 9 matches. The qualifier 1 was played between SRH and CSK in Wankhede Stadium, Mumbai on May 22, 2018. Chennai Super Kings won the toss and opt to bowl first. SRH scored 139 runs losing 7 wickets. It was not a good total but the match was being very close. But finally, CSK won the match because of the magic of Faf du Plessis. He scored 67 runs in 42 balls with a strike rate of 159.52. After losing a match against CSK in qualifier 1 the SRH didn’t lose hope and played very well in qualifier 2 and won. And they were ready to face CSK again.

Chennai Super Kings won the toss and opt to bowl first. The final match was played between CSK and SRH at Wankhede Stadium, Mumbai on May 27 (2018). SRH bat first and scored 178 runs losing 6 wickets. And that was the mammoth score for final. But the CSKians were ready to face it. Shane Watson played very aggressively and scored 117 runs in 57 balls with a strike rate of 205.6 and became the game-changer for CSK. CSK easily hit the target and redefined enough score limits for finals. CSK achieved the target by losing only two wickets. This win against a firm team having a fabulous bowling attack made a long-lasting impact on the hearts of every cricket lover. The CSKians proved that they can tackle the pressure of final and achieve any target under the leadership of The Captain Cool “MS Dhoni”.